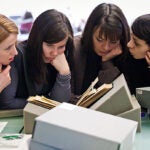 A daytime visitor to Arts @ 29 Garden will feel the serenity of Harvard’s newest space for art making. It’s spacious, open, and sunny.

But through Feb. 28, that serenity will be shaken a little by “Poetic Urbanisms,” the first formal art exhibit there. The show’s photographs, flickering moving images, projected text, and shelves of chained books reveal overlooked city spaces: curbsides, scaffolding, battered signage, and benches too inaccessible for sitting. The effect is creative unease, the dissonance that art often inspires.

Her courses explored archaeology as a metaphor for modernity, a quest to go beneath the surface of the modern city that drew on both art theory and art practice.

The co-organizer of Boym’s exhibit is Jesse Shapins, a doctoral student at the Harvard Graduate School of Design and a 10-year veteran of that hybrid pursuit, which he calls the “media archaeology of place.” Students in the courses, cameras or cell phones in hand, carried out the creative assignments now on display.

The Russian-born Boym, who is the Curt Hugo Reisinger Professor of Slavic Languages and Literatures, teaches a related course this semester, CL 242: “Text, Image, Public Sphere.” She and her students gather once a week in a seminar room at 29 Garden St. to pore over readings by the great art theorists of the 20th century.

Readings from Walter Benjamin, Hannah Arendt, Roland Barthes, and others pair academic rigor with art making.  “The students don’t just read,” said Boym. “They practice.” This “double movement between research and art” is important, she said, and encourages Arendt’s notion of “ passionate thinking,” a way of “thinking with experience” that Boym said preserves “wonder and surprise.”

Pairing theory with practice is in tune with Arts @ 29 Garden.

“Everything we do here is connected to the curriculum,” said Bess Paupeck, program manager at the new space.

Along with its art and books, 29 Garden St. imparts an urban magic of its own, said Boym, and could easily be Harvard’s interface with the city around it. It was once a hotel, and later a police station, and today is largely graduate student housing. “The space has amazing potential” for showing contemporary art, she said, and adds significantly to Harvard’s art-making infrastructure. She hopes to have experimental art exhibits there once or twice a year.

Boym introduced “Poetic Urbanisms” as a way to “discover the untold stories of our everyday environments.”

The exhibit includes the work of 14 students, whose dictionary-like entries — with images, quotes, maps, and text — are in a book published for the opening, “Peripl-urban: A New Urban Language of Poetic Estrangement.” The term is from “periplum,” used by Ezra Pound in “Cantos” to describe a poet’s unconventional mapping of space and time.

One page, mapped to a Cambridge address, shows a gritty curb marked with a slash of white paint. In the street is a crumpled cigarette pack. “To live,” adds a quote by Walter Benjamin, “means to leave traces.”

For a look at the student work, and their alphabetical entries on overlooked urban places and concepts visit the site created by Shapins and New York media artist Brian House.

Along one wall is “Hydrant Images,” photographs in hanging plexiglas frames. Fire hydrants — unintentional urban sculptures of a kind — are paired with real and imagined text from immigrant narratives. It’s a doubling of estrangement that is both aesthetic and social.

In noticing the accidental art of hydrants at all, said Boym, “I feel like a pioneer.”

In “Phantasmagorias,” hanging plastic screens show shifting pictures captured by the “multiburst” feature on Boym’s digital camera, which creates what she calls “16-second art.” It includes the blur and fracture of subtle movement. “The act of touching is something we never see” in photographs, she said.

Along another wall is “Portable Houses,” a series of urban photographs that play with reflections in windows, registering sadness, nostalgia, and surprise. In one, a peacock ambles improbably into a Manhattan alley. “I spent an afternoon following peacocks,” said Boym, and she had to slip away from academic meetings to do it.

“Poetic Urbanisms” is on display through Feb. 28. Gallery hours are 11 a.m. to 1 p.m. weekdays except Thursdays, or by appointment. For more information, email Bess Paupeck, at paupeck@fas.harvard.edu, or Svetlana Boym, at boym@fas.harvard.edu.