Passion and the flowering plant 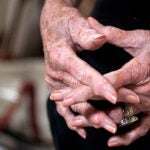 The ‘core pathway’ of aging

It may have been his encounter with a fetal pig while engulfed in a cloud of formaldehyde fumes as a freshman at Oberlin College that made a botanist out of the Arnold Arboretum’s new director, William “Ned” Friedman.

By his senior year in high school, Friedman knew he loved biology, but in that freshman college course he wasn’t feeling the love from cutting up the pig. The love came the next semester, when he sampled botany.

“Dissecting that fetal pig, steeped in formaldehyde, I just couldn’t get into it,” Friedman said during an interview. “Then, during the plant half of the course, I felt this connection with these organisms. I couldn’t imagine doing anything else.”

Friedman, who took over as director of Harvard’s famed Arnold Arboretum in January and is the Arnold Professor of Organismic and Evolutionary Biology in the Faculty of Arts and Sciences, followed that blooming passion for 30 years with an enthusiasm that’s still apparent as he shows visitors around the new Weld Hill research building.

Striding through the still-empty facility just weeks after officially starting his directorship, he envisions not only the lab benches and spaces where equipment will soon sit, but a vital center for plant science, crowded with research scientists, graduate students, and undergrads interacting over samples drawn from the field, from the facility’s greenhouses, and even from the Arboretum’s trees themselves, cultivated over the 139 years since the Arboretum’s founding. Friedman also wants to infect neighbors with his excitement, reaching into the community with open houses and events like the already-begun Director’s Lecture Series.

Friedman, who conducted his doctoral work at the University of California, Berkeley, focused his attention on the reproductive structures of plants and on the rise of the dominant group on Earth today, flowering plants. Flowering plants appeared relatively recently in evolutionary history and diversified broadly, becoming everything from familiar garden plants to trees to grasses to aquatic plants like the water lily.

His work, conducted from the fields of New Caledonia to the Arboretum itself, has helped to illuminate flowering plants’ diversification from more ancient lineages of seed plants such as gymnosperms, which include pines and ginkgo trees. The work of Friedman and his research team has overturned more than a century of widely held views about the earliest phases of flowering plant diversification 130 million years ago. His studies of the process of sexual reproduction in ancient lineages of flowering plants have revealed a number of key stages in the evolutionary establishment of the tissue in all flowering-plant seeds nourishing the embryo.

Friedman also has long been interested in the history of biology, and so studied the father of evolutionary biology, Charles Darwin, whose book “On the Origin of Species” was a foundational document. Friedman taught courses on Darwin while at the University of Colorado, where he taught before coming to Harvard. He has written about Darwin’s troubled thoughts on the evolution of flowering plants, which Darwin termed an “abominable mystery” because the fossil record known at the time showed an uncomfortably rapid evolution.

Darwin, a proponent of slow, gradual evolution, was concerned that flowering plants’ apparently rapid rise and diversification would be used as an argument against his views. He hypothesized that perhaps flowering plants began their evolution in an out-of-the-way place where fossils had not yet been discovered. Subsequent finds have since extended the timeline of flowering plant evolution, making the mystery not quite so great.

While Friedman has remained intrigued by the structure, function, and origin of plants, he is also enamored by the beauty he sees as he examines them.

“The science — you should be passionate about it,” Friedman said. “If you don’t appreciate that you’re in the midst of incredible beauty, you’re missing something.”