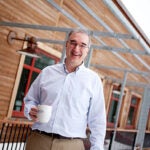 Passion and the flowering plant

In 1967, novelist Vladimir Nabokov was asked what he might have done had he not become an author.

“It is not improbable that had there been no revolution in Russia, I would have devoted myself entirely to lepidopterology and never written any novels at all,” said Nabokov, who wrote more than 30 works of fiction.

Unbeknownst to many, Nabokov had two distinguished careers: one writing fiction, and one studying butterflies. Now, an international team led by Naomi Pierce, the Hessel Professor of Biology and Curator of Lepidoptera at Harvard’s Museum of Comparative Zoology (MCZ), has shown that Nabokov was remarkably insightful about the biogeography and evolution of blue butterflies in the family Lycaenidae.

Ten years before publishing “Lolita,” Nabokov, in a moment of broad evolutionary insight, published a detailed hypothesis for the origin and evolution in the New World of the butterflies he studied, the Polyommatus blues. Nobody paid much attention to the entomological musings of the amateur lepidopterist, who was then a lecturer in literature at Wellesley College and unofficial curator of lepidoptera at the MCZ. In a room in the museum, he pored over specimens looking for clues to their ancestry.

It was 1945, long before the advent of molecular genetics. Armed only with a microscope and the insight born of a hobbyist’s devotion to his science, Nabokov described the migration of Polyommatus blues from Asia over the Bering Strait in five waves, each giving rise to a separate New World group. He predicted that modern-day South American species of blues arose from the earliest of these groups when they migrated south across the isthmus of Panama.

Alternatively, rather than migrating across the Bering land bridge, the species in South America might also have been the product of the splitting apart of Australia, South America, and Africa from an ancient protocontinent known as Gondwanaland. But Pierce felt this hypothesis, proposed by Col. John Eliot, an expert on the taxonomy and systematics of the family Lycaenidae, seemed unlikely given the age of the butterflies involved.

Pierce and her team set out to reconstruct the Polyommatus blues’ family tree using modern sequencing techniques. In so doing, the scientists hoped to determine whether Nabokov had been correct, or whether the alternative hypothesis could explain the distribution of Polyommatus blues across the Western Hemisphere.

“The study required eight years of work, including the collection of samples across the New World from Canada to Patagonia,” Pierce says. “It would not have been possible if the postdoctoral fellow who led these expeditions to South America, Roger Vila, were not such an intrepid naturalist and mountaineer.  Many of these species are rather rare, and can only be found in small populations on the tops of the Andes for a very short time period each year.”

Pierce and her colleagues used a molecular clock — a method of determining how long ago two species became distinct — to determine when the butterflies arrived in South America, which would indicate which hypothesis was correct.

“The breakup of Gondwanaland occurred 80 to 100 million years ago,” Pierce says, “whereas the isthmus of Panama formed 3 to 5 million years ago. Even if the molecular clock were relatively inaccurate, we could nevertheless distinguish between these two very different scenarios.”

The group’s finding, reported in the Proceedings of the Royal Society B: Not only was Nabokov correct about the general origin of the blues in the New World, but he correctly predicted the age sequence of all five waves of migration. The oldest of the groups crossed approximately 11 million years ago, Pierce’s group found, when a land bridge was still in place. It was that first group that later migrated across the isthmus into South America.

Nabokov’s genius is not lost on Pierce.

“What’s the probability of predicting the exact sequence of five evolutionary events?” she marvels. “He had extraordinary insight, and for 65 years, nobody really paid much attention.”