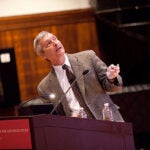 Agouti gene may generate patterns from stripes to spots in vertebrates

Scientists at Harvard University are moving closer to answering some age-old questions.

The answer may be a gene called agouti, which the Harvard team has found governs color patterns in deer mice, the most widespread mammal in North America. This gene, found in all vertebrates, may establish color pattern in a wide variety of species, a process that has been poorly understood at both the molecular and the evolutionary level.

“The question of how color patterns are established in vertebrates has been a black box,” says Marie Manceau, a research associate in Harvard’s Department of Organismic and Evolutionary Biology and lead author of a paper appearing this week in the journal Science. “Taking advantage of the simple color pattern of deer mice — which have a dark back and a light belly — we showed that small changes in the activity of a single pigmentation gene in embryos generate big differences in adult color pattern.”

Manceau and senior author Hopi E. Hoekstra found that color patterns in these mice rely on the establishment of an embryonic “pre-pattern” of agouti expression. In the mice they studied, this took place midway through gestation — just 12 days after conception, well before the first pigments are ever produced in the skin.

Agouti had previously been known to affect the type of pigment found in vertebrate fur, feathers, and scales: Little expression of the gene in adults results in the production of dark pigments, while robust agouti activity generally yields light pigment production. But Manceau and Hoekstra found that subtle changes in the gene’s embryonic activity can also make a profound difference in the distribution of pigments across the entire body.

“During embryogenesis, agouti is expressed in the belly, where it delays maturation of the cells that will eventually produce pigments,” says Hoekstra, John L. Loeb Associate Professor of the Natural Sciences at Harvard. “This leads to a lighter-colored belly in adults, which is the most common color pattern across a wide variety of vertebrates, from fish to antelope.”

Beyond color patterning, this study highlights how genetic and developmental mechanisms underlying trait variation can affect the evolution of natural diversity: Even small changes in agouti gene expression can establish a completely new color pattern. In deer mice, natural selection drives changes in the amount and place of agouti expression, which in turn results in new color patterns that can camouflage animals from visual predators in habitats including dark forests and light sandy beaches.

“It is hard not to speculate that agouti plays a role in generating more complex patterns — from stripes to spots — in a diversity of vertebrates,” Hoekstra says.

Manceau and Hoekstra now plan to continue researching the molecular basis of animals with more complex color patterns, such as zebra mice, chipmunks, thirteen-lined ground squirrels, and perhaps eventually even leopards and zebras.

“Are the same pre-patterning mechanisms we see in deer mice also involved in the formation and evolution of more complex pigment patterns, like the racing stripes of chipmunks?” Manceau asks. “That’s the exciting question now.”

Manceau and Hoekstra’s co-authors on the Science paper are Vera S. Domingues and Ricardo Mallarino, both of Harvard’s Department of Organismic and Evolutionary Biology. Their work was supported by the National Science Foundation and the Portuguese Foundation for Science and Technology.