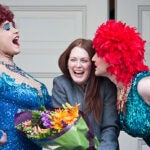 The Moore’s the merrier

For coach and his wrestlers, adversity is a motivating force

There are no bronzed muscles. No fake blood or grandstanding body slams.

But there is panting — lots of it. And beneath the cheers inside the Malkin Athletic Center, soft shoes tapping the mat belie the pretzel-tied arms and writhing struggle of bodies at war.

This is not arena schmaltz. Harvard wrestlers are doing the unthinkable — they’re actually wrestling.

Pitted against Rutgers University on Jan. 7, the Crimson showed how unafraid — and undeterred — they were after three early-season losses. Of the three victories of the afternoon, lightweight Steven Keith’s ’13 (125 lbs.) takedown of Rutgers’ Joe Lange was one of the most exciting.

“I think that my size is a boon because I am more agile. I am quicker on my feet and more flexible and fluid in my wrestling,” said Keith, an economics concentrator. “I know that I can compete with any 125-pounder in the nation.”

Shay Warren ’13 (133 lbs.) and nationally ranked Walter Peppelman ’12 (157 lbs.) also picked up wins against Rutgers, and, later the same day, when the Crimson took on the University of Maryland, Keith and Peppelman defeated their mid-Atlantic opponents. Ian Roy ’14 (174 lbs.) also won his bout against Alex Pagnotta.

Coach Jay Weiss is assured with his wrestlers, but stresses that it is a young team.

“When they realize how good they are, it will be fun,” he said, noting that Keith, Peppelman, Corey Jantzen ’12, and Andrew Knapp ’11 are key wrestlers this season.

“Corey is one of the best wrestlers I have been around. He is so good in so many positions. He’s very strong and works harder than anyone I have ever seen. Walter is a tremendous leader. He’s very passionate about his teammates and shows it. He’s finally got some big wins this year and now is ranked in the top 10 in his weight class, so his confidence is very high right now,” said Weiss.

“Andrew is the heart and soul of this team. He’s coming off a knee injury that sidelined him during his senior year. He came back for one more semester to accomplish his goals and to be with his teammates. Steven had a big year last year qualifying for the NCAA Championships as a freshman; he’s got a strong desire and he’s a great leader.”

Weiss has a month left to prepare his team for the EIWA Championships in March, and after that, the NCAA tournament.

“At the beginning of the year we talked about ‘cutting it in half,’” said Weiss. “The past few years we have been devastated with injuries and finished 11th in the 2010 EIWA Championships. We feel we can do so much better this year so we want to cut that in half.”

Said Keith: “I’ve lost close matches to some of the top wrestlers in the country without wrestling my best, so I’m confident that come the EIWA, I can win. I am trying to improve many things technically, but most importantly I am working to improve myself mentally.

“I like that wrestling is an individual sport and that I am in control of everything. I determine how hard I work and it is me alone that wins or loses. I am solely responsible for how I perform — there is no one else to blame.”

Wrestling is more than a sport, stressed Weiss. It’s about the bigger picture.

“What we do in wrestling will teach us life lessons. I constantly tell our athletes that what they are going through is nothing like what life will throw their way — but we will be better prepared,” he said.

“We try to get better each time we’re on the mat, whether it be practice or competition. I’m always confident things will turn for the better. Why not? I have a saying on my desk that reads, ‘Mundi ex igne factus est,’ which means ‘the world is made of fire.’

“It’s a reminder that suffering and struggle are the ways to truth, to understanding … We learn the best through adverse situations. So yes, I know we will turn things around. I truly believe in each and every one of them. It’s part of the process, and we will all be better because of it.”

For a schedule of upcoming matches.