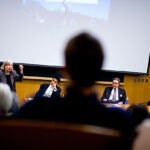 In Boston, they call it “the Grand Bargain.” The recently completed labor negotiations that integrated the Massachusetts Turnpike Authority and the state Highway Department workforces have been widely praised for being cost-effective while keeping workers and union bosses happy.

These days, such success stories are rare, and more necessary than ever, said three local leaders involved in the negotiations, during a discussion Wednesday night (Feb. 23) at the Harvard Kennedy School (HKS).

“I think we are in the earliest stage of what could be the largest experience with labor unrest in our lifetime,” said labor expert Thomas A. Kochan at “Collective Bargains: Rebuilding and Repairing Public Sector Labor Relations in Difficult Times,” an event co-sponsored by the Taubman Center for State and Local Government and the Rappaport Institute for Greater Boston at HKS.

The conversation took on a somber tone in light of the anti-union political sentiment sweeping state governments around the country — and the resulting pushback by growing crowds of fed-up public employees. But the speakers also rallied around the idea that Massachusetts’ public-sector unions can lead by example.

“We have a golden opportunity to address these issues in a creative way,” said Kochan, George Maverick Bunker Professor of Management, professor of engineering systems, and co-director of the Institute for Work and Employment Research at the Massachusetts Institute of Technology’s Sloan School of Management. “And I’m afraid that if we don’t, then these 70,000 people in the streets in Madison might just escalate to hundreds of thousands, or even millions, around the country.”

Over the past week, Democratic lawmakers in Wisconsin and Indiana have defected to Illinois to avoid having to vote on legislation that would eliminate or at least weaken collective bargaining rights. Similar measures are being proposed in Ohio. In all three states, union supporters have been staging protests as Republican leaders argue for aggressive measures to balance state budgets.

In putting together the speaker series, said David Luberoff, executive director of the Rappaport Institute, “we tried to think about issues that were timely and important, but we had no idea we’d be this timely.”

Kochan called the charge against public unions “a virus” sweeping the country. A treatment, in his view, would mean smarter negotiations by public-sector unions that are based on up-to-date numbers and greater transparency about labor negotiations in the digital age.

“It had to be transparent,” he said of the MassDOT negotiations. “It’s not your father’s labor relations of the past, where there are a lot of backroom deals that drive collective bargaining.”

Many labor disputes are resolved through collective bargaining and arbitration, a form of dispute resolution that takes place outside the courts in which unions and employers agree to abide by a third-party arbitrator’s decision. But while both have come under scrutiny from lawmakers and the public, they are not as effective at getting union victories as they seem, Kochan said.

“Arbitration is way overcriticized for what it does,” he said. “Arbitration is also not a panacea.” Collective bargaining is also not a universally effective tool for public unions, he added, because many trades, such as teaching, negotiate at the district level, making it difficult for employees to wield power in large numbers.

“I view what’s going on in this country as almost an attack on the middle class,” he added.

The problem in most states, including Massachusetts, stems from a twofold “lack of trust” regarding unions, said Jeffrey Mullan, CEO and secretary of the Massachusetts Department of Transportation. Taxpayers don’t trust public employees to do their jobs efficiently, he explained, and labor doesn’t trust government officials, who come and go with election cycles, to look out for their interests.

“I call them the We-Be’s,” he said of jaded public employees. “‘We be here before you came, and we be here after you go.’”

The best way to build trust on all fronts, he said, is to empower state workers. “That was a philosophical underpinning of the Grand Bargain,” he said. That requires allowing workers to feel like they have a say in labor negotiations, as well as educating the public about the critical jobs public employees do.

There is an untrue perception that public-sector union workers are overpaid, Kochan said. If one controls for workers’ job skills and levels of education, he said, public employees earn 11 percent less than their private-sector counterparts nationally. (Taking government workers’ generous fringe benefits, such as health coverage, into account lowers that difference to 3.7 percent.)

The media plays a large role in stoking anti-union sentiment, Walsh said. There’s already a negative public perception of unions, especially those representing government employees, and “the media continues to push that.”

Union workers once represented a third of the private-industry work force; they now account for only 7 percent. The public sector has not seen the same rate of decline — 36 percent of government employees are in unions — but current events could mark a turning point for union representation and, by extension, the middle class, Kochan said.

“We allowed that to happen [in the private sector] gradually, quietly, and without much uproar,” he added. “The lesson for the public-sector unions is: Make this visible.”