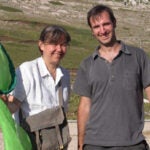 OK, we’re part Neanderthal, and not that much different from chimpanzees after all. We also know that some drugs won’t work on my cancer, even though they might work on yours.

And, if you want to find out what your DNA has been saying behind your back, the price of having your personal genome decoded is dropping like a stone.

The map of the human genome, completed in 2001, has wowed scientists in the years since, even if the scale of its impact has not matched some of the early predictions surrounding the project.

Eric Lander, a leader of the Human Genome Project, said Tuesday (Feb. 22) that he has been surprised at the pace of advances stemming from the project, which has been likened to “biology’s moon-shot.”

“This has gone so much faster than I ever imagined,” said Lander, president and director of the Broad Institute of Harvard and MIT and professor of systems biology at Harvard Medical School. “We’ve been able to read out the lab notebooks of evolution.”

Lander was part of a panel of scientific experts who talked about the Human Genome Project and its legacy at Sanders Theatre.

The event, “Mapping the Human Genome: Ten Years After,” was hosted by Harvard President Drew Faust and webcast by USA Today. Other panelists were Margaret Hamburg, head of the U.S. Food and Drug Administration; M. Susan Lindee, chair and professor of history and sociology of science at the University of Pennsylvania; Vamsi Mootha, associate professor of systems biology and of medicine at Harvard Medical School and associate member of the Broad Institute; and Vicki Sato, former president of Vertex Pharmaceuticals and today professor of the practice of molecular and cellular biology in the Faculty of Arts and Sciences and professor of management practice at Harvard Business School.

“Has sequencing of the human genome been transformative, and in what ways?” Faust asked in her introductory remarks. “How are we all … different than we otherwise would have been and what will the coming decades hold?”

The Human Genome Project started in 1990 and involved scientists from 20 centers in six countries. At a cost of $3 billion, the first draft of the genome was published in 2001 and the full sequence was published in 2003. The resulting map shows 21,000 genes that provide the instructions for making a human being and provide the foundation for better understanding our basic biology, how we differ from other animals, and what happens when things go wrong.

Lander reeled off a list of advancements made possible by the project. In barely the time it takes to get a single drug developed and approved for use in humans, the number of genes tied to common diseases such as diabetes and Alzheimer’s has increased from just 20 to 1,100, with more on the way. Scientists have decoded the genomes of dogs, chimpanzees, laboratory animals, and a host of other creatures. The cost of reading a genome has fallen dramatically in just 10 years. Technology today can do in five minutes a decoding task that would have taken a year to complete a decade ago, Lander said.

The revolution extends to students and young researchers, who have at their disposal not only a new understanding of the foundation of life, but an array of equipment and techniques that didn’t exist not long ago.

“They have the tools to do things today that it used to take armies to do,” Lander said. “My expectations have been blown away.”

When it comes to the public’s expectations, however, hype surrounding the project may have led some to imagine an era of rapidly developed genetic cures, Sato said.

Instead, as our understanding has advanced, the complexity of many diseases has emerged.

But that’s not to say the Human Genome Project hasn’t had an effect on some illnesses, Mootha said.

“I’m really excited about the future. If I were a student or graduate student, I don’t think there’s a better time to embark on biomedical research.”

One problem, Mootha said, is that there is a “tsunami” of data from all the genetic analysis going on, so much so that equipment can’t handle or even store it.

Sato said it has taken time for pharmaceutical companies to change how they operate to take advantage of a flood of genomic data. They have had to change the way they look at disease, but they also have gained a better understanding of the differences between patients, and the fact that certain medicines work better on some people than others.

“If they have a mutation, we know this drug won’t work even though it is the same cancer [as another person without the mutation],” Sato said. “So much has changed in a relatively short period of time, I can’t imagine what the medicine of the future will look like.”