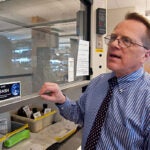 Sgt. Kevin Bryant peered down from a sunny perch inside the Science Center. Just outside the floor-to-ceiling window, the lawn buzzed with the morning activity of students, canvassers, and tourists. “That right there,” he said, “is the rhythm.”

A 20-year veteran of the Harvard University Police Department (HUPD), Bryant is trained to pick up on the natural ebbs and flows of daily life at the University. And like many seasoned police officers, he has a sixth sense for when something just seems off: a shady character idling in the Yard, a suspicious bag left unattended.

Bryant takes that approach one step further. In many ways, his entire life revolves around searching for rhythm where he can find it and creating harmony when he can — through Buddhist meditation, Baptist worship, and martial arts, or in the world around him, as HUPD’s diversity and community liaison and community policing and safety officers team supervisor.

“People are different, but we’re a lot alike, and those differences are what make us interesting,” he said. It’s Bryant’s job to make sure the many disparate voices at the University are being heard and respected, from Harvard custodians to small-business owners to LGBT students.

His role takes many forms. One day Bryant could be organizing an HUPD basketball game against the Harvard Black Men’s Forum. The next, he might host a discussion at the Business School in response to an uptick in street crime.

“We can’t just stay in our cruisers,” he said. “You’ve got to get out there and talk to people.” By acting as a bridge to the civilian community, he gets to remind people that, in his words, “Officers are people, too.”

A Baltimore native, Bryant moved to Massachusetts with his parents as a boy. In the late 1980s, he saw a television commercial for the Somerville Auxiliary Police Department and thought he’d give it a try. He became a volunteer citizen officer and later joined the Somerville Housing Police Department full time, working a rough beat: the housing projects along Mystic Avenue and North Street.

“Nobody went peacefully,” he said. “You usually had to rumble with people to arrest them.”

After four years, a friend persuaded him to take the HUPD exam, and he passed. The Harvard job offered him “a totally different type of policing” from the streets of Somerville, he said.

“Where else would I get to meet Nelson Mandela or His Holiness the Dalai Lama?” he said of his two decades at Harvard. “At the same time, we still have crimes here we have to solve. It’s a pretty good mix.”

Three years ago, the department created Bryant’s current position, with the goal of improving communication between the force’s 85 officers and the people they serve. His work entails a constant search for undiscovered or underutilized channels of dialogue. Some changes to the force’s methods have been small but significant, such as a decision to host community meetings with translators present.

“You have to build a bridge of trust in each community, but it takes time,” he said.

On one occasion, Bryant met with members of Harvard’s dining services staff. It was winter, and with the sun rising later in the day, many employees were concerned about walking across the Yard in the dark to make it to their early-morning shifts.

“Now, we’ll have a cruiser posted in the Yard early in the morning,” he said. “Before we had these outreaches, we never would have known that was a concern.”

Bryant is easy-going, the kind of guy who puts down a quadruple-espresso every morning and makes it seem like an herbal tea. He credits Zen meditation with helping him to keep a level head.
“When a police officer comes on the scene, we’ve got to be the calm one,” he said.

Bryant took up karate at 12 and discovered a passion for martial arts. He has studied aikido, taekwondo, and jujitsu. At age 56, he wields a fifth-degree black belt and holds the title of shihan, or master instructor. He teaches kenpo karate, a Hawaiian hybrid of Japanese, Chinese, and other influences, at a studio in Arlington.

“Karate focuses you, keeps you humble,” he said. “It teaches you that true power is like an iceberg — most of it is underneath the surface.”

That same emphasis on humility and reflection endeared him to Buddhism, which he practiced for many years before returning to his Baptist roots at his wife’s urging. Last year, Bryant was ordained as a deacon at Myrtle Baptist Church, a 400-member congregation in West Newton, and he will soon begin training to become a minister.

He still meditates and has found it easy to slip back into prayer. “It’s meditating with God.”

Although the words “community liaison” aren’t in most officers’ job titles, Bryant said that role isn’t limited to just one person.

“It takes a special type of officer to work here,” he said. “We’re all pretty approachable.”