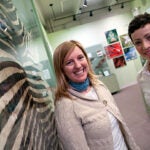 Lila (the patient’s name has been changed) was only in her 20s when she learned that she could be at increased risk for breast cancer. A genetic test had revealed that her mother carried a mutation signaling a heightened risk for the disease. But Lila opted to live with uncertainty — and the hope it engendered — a little longer. She wouldn’t test, but she would be vigilant, opting for frequent mammograms.

At age 34, Lila, now the mother of two small children, learned she had breast cancer. Personalizing her treatment would require genetic testing. This time she consented. The procedure verified the mutation and revealed another detail: Her tumor flourished with exposure to hormones.

“She knew the mutation increased her risk for a second cancer, so she chose bilateral mastectomy,” says Judy Garber, a Harvard Medical School (HMS) associate professor of medicine at Dana–Farber Cancer Institute and Brigham and Women’s Hospital. But because the tumor was hormone-receptor-positive, Lila faced another decision: take drugs to cut her hormone levels, or have the source of those hormones, her ovaries, removed. She chose the surgery.

Garber, who directs the Cancer Risk and Prevention Program at Dana–Farber, describes Lila’s decisions as aggressive for a young woman, even one burdened with a mutation promising a lifelong threat of cancer. Could her choices have been driven by her desire to remain a mother to her children for as long as possible?

Lila’s story underscores how genetic diseases thread throughout a family and how decisions made by individuals — to test, to treat, to disclose — are fraught with difficulties and emotions that can strain, and sometimes break, family ties. The reach of genetic diseases goes beyond the individual, often visiting ethical dilemmas upon a patient’s entire family.

Over the past three decades, genetic testing and its offspring — personalized medicine — have matured; tests for more than a thousand diseases are now available. Yet while the ability to identify genetic signposts for patients allows doctors to recommend screening, offer preventive surgeries, and fine-tune drug treatments, that same ability delivers unsettling futures to those with genetic evidence of diseases that as yet have no cure, such as Huntington’s disease, cystic fibrosis, hemophilia, and Alzheimer’s disease.

Often, patients and doctors become entangled in such issues as how to best share at-risk information, access treatment options, and weigh decisions about hidden threats to the young and unborn. And sometimes these issues mushroom, becoming quandaries for society as a whole.

Patients rely on physicians to deliver medical news directly and in confidence, good or bad. Medicine’s growing ability to plumb a person’s genetic information, however, can challenge this expectation.

“People are accustomed to keeping some details private,” says Ting Wu, an HMS professor of genetics and director of the Personal Genetics Education Project. “But genetic information is explicit; it speaks to pedigree.”

Wu notes that while patients might seek genetic testing as a means of customizing their treatment and prevention strategies, others — particularly at-risk family members — may be less amenable to testing and the possibility of news of an incurable condition.

“Patients realize that information can sometimes be used in a way that hurts someone,” says Wu. “That possibility — and that fear — can present a slippery slope: The more we learn, the more information we have to use, properly or improperly.”

How deeply those details penetrate family defenses can be found in a story Wu cites of a 23-year-old woman who chose to be tested for Huntington’s disease. The young woman’s grandfather had been ravaged by the rare brain disorder for three decades, a maternal aunt had tested positive for it, and she was now witnessing a cousin’s debilitation. Her mother, however, refused to test and became embattled with her daughter over the issue. Undeterred, the young woman went ahead with her plans. She learned she carried the gene — as did her mother, by implication. Her mother severed their ties, unable to forgive her daughter for inflicting upon them both what she viewed as future-robbing news.

Kenneth Offit ’81, chief of the Clinical Genetics Service at New York City’s Memorial Sloan–Kettering Cancer Center, has seen the difficulties that disclosure can bring to families. “When it comes to handling the results of genetic testing,” he says, “health professionals must respect the boundaries imposed by the ethical practice of medicine by encouraging, but not coercing, patients to share their news with family members.” But when the patient can’t meet that responsibility, the custodianship of genetic information — and the duty to warn — may be left to the physician.

“Two decades ago, a breast cancer patient we’d enrolled in a study of the genetic risks of certain cancers died before learning she had a mutation linked to her cancer,” Offit recalls. “We needed to tell her daughters of their own risk — but we didn’t know their locations.”

Offit called the woman’s mother to explain his need to contact her granddaughters. She rejected his plea and ignored his follow-up letter. Years later, after she had died, the daughters found a letter that Offit had written — and showed up at his clinic. One daughter tested positive for the mutation and began regular screening.

Offit once told this story to a group of lawyers to illustrate how he had tried to fulfill his duty to warn. Terse, unsettling comments followed. One lawyer chided him for failing to hire a private detective, find the daughters, and tell them their risks. Another frostily said she would have offered to represent the daughters should they have developed breast cancer before they were notified and elected to sue.

Physicians aren’t the only ones tussling at the ethical edges of genetic testing. Patients, too, wrestle with such dilemmas. They share test results to warn siblings and cousins, help adult children make childbearing decisions, or explain their medical care to others. But patients also withhold information to avoid causing alarm and to notify only those relatives at greatest risk. Information sharing may hit additional barriers, both real and perceived, such as geographic distance, adoption, and stigma.

Disclosure requires a middleman when the patient is very young. Parents must act on behalf of newborns, children, and adolescents whose genetic disorders may not manifest until adulthood. “We often avoid testing children unless it’s absolutely necessary,” says Joseph Thakuria, an HMS instructor and clinical geneticist at Massachusetts General Hospital. “We worry about how testing can negatively affect this population.”

Thakuria, who trains medical students and house staff as well as genetic counselors, says that his worries about stigma and self-concept sometimes begin with the parents. “It’s not unusual for one to say to the other, ‘It’s from your side of the family.’ Usually it’s said half-jokingly, but I always try to nip that thought in the bud.”

He does so by sharing a fact: We are all carriers. Geneticists estimate that each of us has 6 to 25 genes that, under the right conditions, could trigger a disorder or disease in a person or in his or her offspring. Understanding this helps move parents away from shock, guilt, and grief and into proactive postures, such as joining a support group, learning about treatments and interventions, and safeguarding their child’s quality of life.

Protecting quality of life for all who undergo genetic testing has gained legal ground in recent years. Worries about institutional discrimination that might deny medical coverage, employment, and equitable access to the benefits of personalized medicine have been eased in the United States by provisions forged in the Genetic Information Nondiscrimination Act, or GINA, and in the recent health care reform legislation.

Since 2008, GINA has accorded genetic information the same privacy protections that the Health Insurance Portability and Accountability Act, or HIPAA, has provided to medical data. GINA has also prohibited genetic discrimination by health insurers and employers.

GINA does not, however, affect life, disability, or long-term care insurance. Nor does it prevent insurers from determining eligibility or rates based on a person’s gene-linked disease or disorder that has already manifested. And while GINA mandates payments for tests for mutations linked to diseases such as breast cancer and colon cancer, it doesn’t require coverage for preventive interventions.

Health care reforms signed into law in 2010 may help flesh out just what personalized medicine can and can’t deliver. The reform act creates an independent Patient-Centered Outcomes Research Institute charged with examining the use and comparative effectiveness of medical products and services within groups differentiated along traditional lines — such as race, sex, and age — as well as new ones distinguished by genetic and molecular characteristics.

Society’s acceptance of personal genomics will surface in its laws, says HMS geneticist Wu. Preimplantation genetic diagnosis, for example, which screens for genetic diseases in embryos used for in vitro fertilization, may come under scrutiny. Studies have found that parents see an advantage to this screening procedure if it means they can avoid receiving a prenatal diagnosis requiring them to consider terminating a pregnancy. But others fear that choosing an embryo based on its genetic makeup is mere prelude to selecting for gender, IQ, and eye color — in short, a slide toward eugenics.

For Wu, education is the right response. “We need to understand the social, legal, and ethical outcomes of our decisions,” she says. “When we know the issues surrounding genetic testing, we’ll consider carefully before judging the decisions of others. For when we categorize others, we categorize ourselves.”