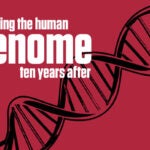 The map of us

By studying cellular movements at the level of both the individual cell and the collective group, applied physicists have discovered that migrating tissue flows very much like colloidal glass.

The research, led by investigators at Harvard’s School of Engineering and Applied Sciences (SEAS) and the University of Florida, advances scientists’ understanding of wound healing, cancer metastasis, and embryonic development.

The finding was published online Feb. 14 in Proceedings of the National Academy of Sciences.

Cells often move from one part of the body to another. In a developing embryo, for example, cells in the three germ layers have to arrange themselves spatially so that the cells that will become skin are on the outside. Similarly, as a cancerous tumor expands, the cells proliferate and push others aside. As a wound heals, new cells have to move in to replace damaged tissue.

It is known that cells accomplish these movements through internal cytoskeletal rearrangements that allow them to extend, retract, and divide. At some point during the migration, though, the new tissue settles into place and stops.

“We’re trying to understand it from a fundamental point of view,” says principal investigator David Weitz, Mallinckrodt Professor of Physics and Applied Physics at SEAS. “What we’re really trying to get at is: Why do things stop moving?”

The glass under discussion is not the kind used in windows — though that is part of the larger category, which includes any amorphous materials that are viscous enough to remain solid for a reasonable period of time (often thought of as 24 hours) but which flow over longer periods.

Cream that is churned into butter goes through a sort of glass transition, as the increasing density of particles in the fatty emulsion forces it to become solid. Like any glass, butter will lose its form if the temperature rises.

As supercooled fluids and colloids (like cream) become dense and approach the glass transition, the particles exhibit certain characteristic motions.

“We study this extensively,” says Weitz, who leads the Experimental Soft Condensed Matter Group at SEAS. “We take small particles, and we increase their concentration more and more until they stop moving and they become a glass — and we understand how that behaves very well.”

Living cells, though, add several levels of complexity to the system: They vary in size, shape, and rigidity; they divide; they sense their environment; and they exert their own forces on their surroundings.

“What is really surprising to us in this research with tissues,” says Weitz, “is that many of the features that inert particles exhibit as their concentration increases are also exhibited by cells. The real qualitative difference is that small particles move only because of thermal motion, whereas cells actually move themselves.”

To simulate and study the migration of living tissue, Weitz’s team deposited thousands of epithelial cells — specifically, canine kidney cells — onto a polyacrylamide gel containing the protein collagen. The researchers watched them grow and move under a microscope while measuring the individual and collective cellular movements, as well as the changes in density caused by proliferation.

The researchers found that when the cells are in a confluent layer (close enough to be touching), they flow like a liquid. However, when cell density increases past a certain threshold, the tightly packed cells begin to inhibit one another’s movement. As a result, some cells are able to travel in groups, while others hardly move at all.

In other words, they behave just like a supercooled fluid or colloidal suspension transitioning into a glass.

“The implications for biological processes are very surprising,” says lead author Thomas E. Angelini, formerly a postdoctoral researcher at SEAS and now an assistant professor at the University of Florida.

“Imagine a model wound in which a large group of cells are removed from the middle of a confluent layer,” he says. “Cells will migrate inward to fill the void. Our results demonstrate that the low density of cells in the center of the wound is analogous to a raised temperature in the center of a molecular glass, causing flow within the hotter region.

“You could say that a wound is melted glass.”

Weitz and Angelini’s co-authors include Edouard Hannezo of the Ecole Normale Supérieure in France; Xavier Trepat of the Institut de Bioenginyeria de Catalunya, the Universitat de Barcelona, and Ciber Enfermedades Respiratorias in Spain; Manuel Marquez of YNano LLC; and Jeffrey J. Fredberg of the Harvard School of Public Health.