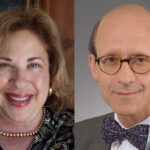 Carroll E. Wood, Jr., Professor of Biology, Emeritus, brought a mind of great precision to the field of plant systematics, focusing on the diverse flora of the southeastern United States.  Making use of the unexcelled resources at Harvard—which include the largest private herbarium in the world, several outstanding botanical libraries, the extensive living collections of the Arnold Arboretum, and many specialized collections in paleobotany, economic botany, and plant anatomy—he developed a broad biological approach to plant description that emphasized the genus rather than the species as the unit of study.  The result of his work was a floristic synthesis of the diverse flora of the southeastern United States, ranging both latitudinally and altitudinally from the Carolinas to Florida and westwards to include Arkansas and Louisiana.

Wood is remembered affectionately by his students for his encyclopedic knowledge and seriousness of purpose, which were leavened in the classroom by his mischievous, sometimes wry, humor, comic anecdotes, and play on words.  In recognition of his editorial precision in matters of style and grammar, his associates awarded him the title of “Supervisor of Punctuation.”  Yet, for someone who was dedicated to sound scholarship, botantical order, and semantic precision, his office was a curious masterpiece of untidiness, referred to by his students as “Wood’s Hole.”

Wood grew up in Salem, Virginia, where his father was a pharmacist and his mother was a teacher.  His early interest in natural history, which was encouraged by his parents, evolved after high school, into an inclination towards botany but with a sustained interest in butterflies, first as an undergraduate at Roanoke College and subsequently as a Masters student at the University of Pennsylvania.  During this period, he was already collecting extensively, working on a local county flora with a special emphasis on carnivorous plants.  His academic career was interrupted by military service with distinction in Europe towards the end of World War II, although he continued to collect plants—in military uniform—during periods of leave.  Upon returning to graduate school, he rapidly completed a Ph.D., working at the University of California at Berkeley and under Professor Merritt Fernald at Harvard University.

Having already established a large network of fellow botanists throughout the United States, he first took a position as Assistant Professor at the University of North Carolina and then began his long affiliation with Harvard as Associate Curator at the Arnold Arboretum, rising to Professor in 1972.  His innovative research project, the Generic Flora of the Southeastern United States, which continues to this day, takes a biological approach to the description of plants involving all aspects of biology, including their evolutionary history, ecology, geographic distribution, and economic uses.  Funded extensively from external sources, the project requires a contributor to look deeply into the biology of a plant group throughout its total range.  Although Wood wrote many of the early descriptions himself, he soon recruited a host of collaborators, including graduate and postdoctoral students, his herbarium colleagues inside Harvard, and professional colleagues from outside institutions.  Over time, his involvement became increasingly editorial, a suitable application of his extensive botanical knowledge and his insistence on the precise application of style and grammar.  A selection of drawings from the Generic Flora of the Southeastern United States, based on Wood’s dissections of fresh or fluid preserved material, was published as a Student’s Atlas of Flowering Plants.  Perhaps his most visible legacy was Plant Systematics: A Phylogenetic Approach, a textbook of plant classification produced by a cohort of his students whom he had shepherded into the modern era of molecular and phylogenetic systematics.  His knowledge of the principles of plant nomenclature was deployed internationally and recent botanical monographers have used his generic approach for large tropical families.

As a teacher, Wood was known for accommodating individual student needs through personalized tutorials, his enthusiasm for field study (especially at the Arnold Arboretum), and his willingness to make material available at all hours for his courses in plant systematics.  This tradition of the open laboratory still continues in the Herbarium.  Wood was affiliated with several scientific societies, notably the New England Botanical Society.

In retirement, Wood continued his editorial work in the company of his cat, named Birnham.  He also remained interested in horticulture, an enthusiasm originally nurtured by his mother, becoming a valued source of information about gardens and gardening among his friends and neighbors in Boston’s South End.  An avid hiker, he climbed to the top of Mount Washington in his late eighties.  When Carroll Wood died of a heart attack at the age of eighty-eight, people of all walks of life mourned his passing, but remember him with great affection.  He is survived by one brother but left no issue.