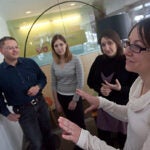 On a day when Harvard celebrated the accomplishments of the Human Genome Project, the Radcliffe Institute hosted a scientist whose work focuses not just on DNA, but on the mechanisms that control its expression.

In this latest talk (Feb. 22) in the institute’s Dean’s Lecture Series, C. David Allis, the Joy and Jack Fishman Professor at The Rockefeller University, explained that there are important factors in development that go beyond the DNA “blueprint.” For example, why is it that only one in a pair of genetically equal identical twins can develop autism?

The lecture, titled “Beyond the Double Helix: Varying the ‘Histone Code,’” focused on Allis’ contributions to the field of epigenetics (literally “above” or “in addition to” genetics). His work centers on histones — proteins known for their function in packaging and ordering DNA, thereby making up the structural component of chromatin. However, histones also play a large role in gene regulation, acting as an on/off switch for gene expression, and this feature, Allis explains, allows for a much more flexible method for scientists to interact with DNA.

In discussing the importance of a specific histone, H3, Allis notes that this particular protein projects from the nucleosome molecule like a small tail. Other proteins read the tail, he explained, in order to carry out various tasks such as gene expression or DNA repair. The tail can modify certain positions along its amino acid chain, rendering it readable or unreadable by its associated transcriptional regulators. Apart from just reading the tails, these effector proteins can also act as writers or erasers to the H3 codes.

Major discoveries in 1996 of the histone’s on/off abilities prompted an explosion in the field of epigenetics. Since then, its potential in disease treatment has been extensively explored. For example, only 10 years after the original breakthrough, the first epigenetic drug, used to treat T-cell lymphoma, was already being given to patients.

As more is learned about how specific genes are involved in certain diseases, Allis’ hope is that epigenetic therapies will be able to correct or reset malfunctions in genetic expression.