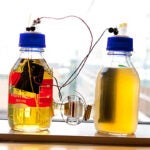 Guiding discoveries to the public

Five recent graduates of the Harvard’s School of Engineering and Applied Sciences this week (Jan. 31) talked to undergraduates about life beyond Harvard in the first of a series of engineering-themed career events hosted by the FAS Office of Career Services. The alumni have drawn from their experiences at SEAS not just as engineers and programmers, but also as teachers, sailors, consultants, and aspiring doctors and lawyers. Still, they wove their recommendations with three common threads:

Anjuli Kannan ’09 (A.B.) concentrated in computer science and now works for an operations research consulting firm. She uses applied mathematics to assist with decision making — for example, advising a transportation company on the most efficient way to route its vehicles, or helping a public school with class scheduling. She is now applying to graduate programs in this field.

“Of the skills we use a lot,” she says, “programming is a big one—and general quantitative problem solving.” She also recommended courses in algorithmic theory and probability.

Kannan has landed a job she really enjoys, but finding that niche isn’t always easy: “When it comes time to decide what you want to do, you realize you have very little information to go on.” The best strategy, she says, is to pursue internships as an undergraduate.

John Thorlin ’09 (A.B.) concentrated in engineering sciences (mechanical engineering and materials science). While at SEAS, he completed internships at BAE Systems and the Defense Intelligence Agency and expected to work in defense contracting after graduation.

“What I found is that there is a real demand for people who have an engineering background but are doing something else,” he says. “Doing engineering at Harvard signals to [employers] that you’re going to be able to pick up what they want to teach you.”

Thorlin’s interests evolved, and he decided to enroll at Harvard Law School right after graduation. In his first year, he ran (unsuccessfully) for the Massachusetts State House of Representatives. This summer, having completed his second year of law school, he plans to work at Cozen O’Connor in Philadelphia on commercial litigation and complex torts.

As an undergraduate, Thorlin wasn’t sure how his engineering degree would look on a law school application.

“Not only does it not hurt you,” he says now, “but it actually helps you. They look for people with a quantitative background.”

“Doing as many different fields as possible while you’re here is a good idea,” he adds.

Brad Diephuis ’08 (A.B., S.M.) continues to follow his interests. He completed both an undergraduate degree in electrical engineering and a master’s degree in computer science in just four years, through Harvard’s accelerated A.B./S.M. program.

“I think it’s a pretty good deal,” he says of the four-year program. “It gives you more flexibility in terms of classes.”

Since graduation, he has worked at a start-up company that makes medical devices, while also taking courses at Harvard Extension School to fulfill premedical requirements. He now performs research involving mathematical modeling in a lab at Massachusetts General Hospital and is applying to medical school.

Diephuis says he has found that “an engineering degree out of here is a very marketable thing.”

In the two years since graduation, he has roamed the globe and worked at “eight or nine” different jobs, including as a sailor and science officer for the Sea Education Association, a senior engineer for the ARES Corporation, an insurance agent, an emergency medical technician, and a lab assistant.

“It’s your friends who are going to hire you, which is the awesome thing about going to Harvard,” he adds.

Now settling back in Cambridge, Traina is working toward a Ph.D. in mechanical engineering at MIT.

Alissa Cooperman ’10 (S.B.) concentrated in engineering sciences (mechanical engineering) and wrote her thesis on biomedical device design. Her work experience has included a short stint as an English and social studies teacher in Cambridge, and a role producing marketing materials for the Mark Morris Dance Group.

Cooperman now works at TIAX LLC, a technology development company, and is studying to take the Fundamentals of Engineering (FE) exam, the first of two examinations that engineers must pass in order to be licensed as a professional engineer.

To undergraduates, she advises, “Get machine-shop certified.”

An engineering degree from Harvard is valuable to employers in all fields, Cooperman says.