A call to action, amid acting 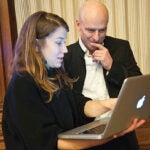 Jafar Panahi sits in an Iranian jail, punished for his films and his political  activism. Reggie Clemons awaits execution in Missouri for murder, despite questions about his guilt. Norma Cruz is the target of death threats for helping to document cases of violence against women in Guatemala.

They are three of the thousands of people supported by the human rights organization Amnesty International. And now they have the American Repertory Theater (A.R.T.) on their side.

Utilizing an ancient drama, a partnership with Amnesty, and a new rock protest musical that encourages people to stand up against oppression, the A.R.T. hopes to inspire its audiences to help victims of human rights abuses around the world.

“Human rights work needs the arts, and we need the human rights piece of it to inspire us to be deeper about what we do in the arts,” said A.R.T.  Artistic Director Diane Paulus, who also directs the new show.

“Prometheus Bound” explores Aeschylus’ ancient story of the Titan god who was condemned by Zeus to an eternity of torture.  His crime was helping to create mankind.

Though it’s a grim premise, the A.R.T. is tackling it head on, presenting  the classic Greek tragedy with a modern twist, including a pulsating score (courtesy of System of a Down frontman Serj Tankian), mosh-pit style dancing in the audience, and one-on-one interactions with Amnesty volunteers.

“We want to inspire a community of human rights and artist activists to teach people about specific actions that are happening right now, and then to give them the tools to actually take action themselves,” said Allegra Libonati, artistic associate of the A.R.T., who has helped to coordinate close to 100 volunteers in the production. “We say: ‘Come to a  rock show, and leave an activist.'”

With the work, Paulus, who is experienced at reinventing classic tales, aims to emulate the way Greek theater was directly connected to community life in Athens. Adhering to her mantra of expanding the boundaries of theater, she invited the community to become part of the show.

On a recent evening, more than 60 people gathered in the lobby of the Loeb Drama Center, eager to learn about how they could get involved with the musical and merge their passions for human rights and the arts.

“I am involved in the acting community here, and it’s so amazing to see it  expand beyond just an artistic thing to a real-world application,” said  freshman Amil Jayasuriya, a volunteer who hopes  to intern at Amnesty International’s headquarters in London this summer.

Throughout the run of the production, Harvard students, students  from surrounding high schools, and members of neighboring communities will take on the roles of activists, helping get the audience ready to rock out and engage. Participants will also act as outreach activists, holding posters of selected prisoners during a vigil after the show, and speaking one-on-one with audience members about the specific Amnesty cases.

The A.R.T. will dedicate each performance to one of eight Amnesty actions calling to free prisoners of conscience and fight against human rights abuses.

The production’s themes can hit close to home. Tankian’s grandfather survived the Armenian Genocide, the mass  killings of the Armenian population in the Ottoman Empire during World War I.

Lyricist and scriptwriter Steve Sater of “Spring Awakening” fame began  translating the play from the ancient Greek several years ago for a modern staging. The work resonates today as much as it did 2,400 years ago, said Sater, who called Prometheus the world’s “first prisoner of conscience” and the play “a radical postmodern drama about resistance and human possibility.”

After the show’s dress rehearsal Thursday (Feb. 24), Paulus stood at the edge of the large crowd still filling the dance floor in Oberon. She watched as many spoke to Amnesty volunteers and grabbed postcards to send to Iran’s leadership, urging that the charges against Panahi be dropped.