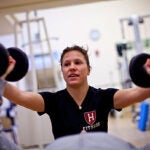 Walter H. Abelmann, professor of medicine emeritus at Harvard Medical School (HMS) and member of the faculty of the Harvard-MIT Division of Health Sciences Technology (HST), died on Jan. 6. He was 89.

Abelmann was born in Frankfurt-am-Main, Germany, in 1921. After being educated in Switzerland, he immigrated to the United States in 1939. He received an A.B. from Harvard in 1943 and an M.D. from the University of Rochester in 1946.

Abelmann’s research focused on the physiology and the pathophysiology of the cardiovascular system, and led to the recognition and definition of the high cardiac output states in patients with cirrhosis of the liver, bacterial pneumonia, disorders of the blood, and nutritional deficiencies. He published more than 260 scientific papers and edited several books. In addition, Abelmann was a consultant to several Boston-area hospitals and universities.

At HMS, Abelmann taught basic as well as clinical courses, including pathophysiology, physical diagnosis, internal medicine, and cardiology. He also introduced a system of evaluating courses. His teaching rounds stressed the mechanisms of disease, the underlying scientific basis of manifestations, and of therapy. He formed close relationships with many of his postgraduate students and fellows, and was very proud of the leadership positions they attained. Many of the 68 fellows he trained in clinical and investigative cardiology became professors, chiefs of cardiology, and heads of cardiovascular societies.

In his retirement years, Abelmann remained active in HST, taught a popular undergraduate seminar at MIT titled “The Art and Science of Medicine,” edited the HST newsletter “The Connection,” and, until 2006, was director of HST alumni affairs.

He is survived by his wife, Rena; sons Arthur and Charles; daughters Nancy, Ruth, and Karen Gross; and nine grandchildren.

Contributions in his memory may be made to the Walter H. Abelmann Family Book Fund at the Harvard College Library, c/o the Recording Secretary, Holyoke Center, Harvard University, Cambridge, MA 02138. There will be a memorial celebration of Abelmann’s life in the spring.