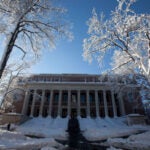 Most people expect to put on a few pounds over the holiday season — and spend January paying for it. But not Kathryn Kunkel.

“I feel like I’ve gotten in better shape since November,” says the Th.D. program administrator. “And I’m more aware of what I’m eating.”

In better shape? Since November?

That’s right. Because Kunkel, along with about 200 of her colleagues from around the University, participated in Maintain Don’t Gain this year. Co-sponsored by the Harvard Recreation Department and the Center for Wellness, the program pits teams of four to six people against each other for prizes such as personal training sessions, private classes for the team, a massage, a team lunch — “and bragging rights,” says Kerry L. Smith, programs manager and a personal trainer at Hemenway Gymnasium. “It’s very big at Harvard to say that you won.”

But winning, in this case, doesn’t mean losing weight, as it would in most gym-centered programs.

“You can’t gain or lose more than 2 pounds either way,” says Jeanne Mahon, director of the Center for Wellness. “So if you’re 128 when you weighed in, you need to be 126 to 130 when you weigh out.”

The team’s total weight is the one that counts, though, so if your four-person team’s total at weigh-in is 600 pounds, at weigh-out — which is coming up this week — it would have to hover between 592 and 608. Raffle prizes are also awarded, with teams getting extra raffle tickets for doing things such as attending classes together.

“You can go to the classes for free,” Kunkel says, “and you don’t have to be a gym member.” Water aerobics, yoga, Zumba, and stress management are among the classes for Maintain Don’t Gain participants.

“It’s a good way for people, particularly staff members, to sample classes they might not ordinarily do without fighting for space with a zillion undergraduates,” says Kunkel. “It’s a way to ease into it so it’s not so intimidating.”

If you’re kicking yourself for not joining Maintain Don’t Gain when it started, don’t worry: You have a second chance. Maintain Don’t Gain may be over for the year, but a new program is just beginning. Team Fitness Challenge starts Jan. 31 and runs until March 11, and is similar to Maintain Don’t Gain in that it’s team-oriented, giving you motivation beyond just that little pinch of love handle.

“Team Fitness Challenge is our most popular program,” says Christina Hoff, Fitness Program manager at Hemenway. Unlike for Maintain Don’t Gain, Team Fitness Challenge team members do have to belong to the gym — but the staff rate for membership is just $24 a year. Another difference is that rather than racking up raffle tickets, team members rack up points, with a daily maximum to discourage overtraining, by spending time in the gym; extra points are awarded for attendance at group exercise classes.

If past years are any indication, many Maintain Don’t Gain alumni will go on to Team Fitness Challenge. “Now that they know how to maintain, they can lose weight with this next step,” says Smith. “Maintain Don’t Gain is a gateway to weight loss, helping people to make lifestyle changes for long-term health and fitness. You need to maintain your weight before you can lose.”

“I think generally I ended up in better shape,” he says. “You get stuck in a gym routine of doing the same thing day in and day out, and this forced us all to give something else a try. I’m a former frat boy from Michigan who’s spent a lot of time lifting and running, and I took a water aerobics class. It’s not something I stuck with, but I’m glad I was able to try it. We pushed each other to go into the gym more, and when the competition ended, we were sort of in that routine. It forces you to get into the groove of taking care of your health and fitness.”