Plotting the demise of malaria 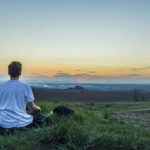 Authorities at symposium point toward eradication of killer disease

Watch your back, malaria.

Authorities on the disease from around the world gathered at Harvard Medical School (HMS) for a three-day session focused on establishing new research priorities demanded by a shift in international anti-malaria strategy, from control to eradication.

Experts speaking at a public session Thursday (Jan. 20) said the changed goals for international malaria efforts, adopted in 2008, necessitate a fresh focus and new research priorities. Authorities said past efforts to control malaria targeted reducing illness and death from the disease, but not necessarily on preventing transmission, since people build up natural immunities, though slowly and over many years.

Malaria is a mosquito-borne disease that causes intense fever, headache, and even death. It is widespread in regions where half of humans live. Last year, an estimated 225 million people contracted malaria. It took nearly 800,000 lives — the majority of them children — last year alone.

Given malaria’s global distribution and complex life cycle — inhabiting first a mosquito and then a human host — the effort will have to be multipronged and collaborative, encompassing everything from active host regimes to nongovernmental organizations, health care facilities, and scientists. The effort will require strategies ranging from continued distribution of pesticide-impregnated bed nets to development of an effective vaccine, speakers said.

The event, “Rethinking Malaria: The Science of Eradication Symposium,” was sponsored by the Harvard Institute for Global Health and the Harvard School of Public Health’s (HSPH) Department of Immunology and Infectious Diseases. Among its speakers were HMS Dean Jeffrey Flier, Harvard School of Public Health Dean Julio Frenk, John MacArthur of the Centers for Disease Control and Prevention, and Regina Rabinovich of the Bill & Melinda Gates Foundation’s Global Health Program.

Dyann Wirth, Richard Pearson Strong Professor of Infectious Diseases, chair of the HSPH Department of Immunology and Infectious Diseases, and one of the symposium’s organizers, said the event brought together leaders not just from science, but also from business, the nonprofit sector, and charitable foundations, who brought a focus on policy to the discussion. With important strides already made against malaria in recent years, the event allowed attendees to take stock and set new priorities. Flier, who delivered introductory remarks, cautioned against any complacency that could reverse recent gains.

Eradicating the disease will require not just research into malaria and its mosquito vector, but also into health systems and delivery methods to ensure that prevention and treatment programs, once developed, are distributed where needed and used properly.

In the lab, developing new drugs to treat malaria and pesticides to kill mosquitoes is critical, Tanner said, because an increase in resistance by the parasite or the mosquito that carries it would be a significant blow to eradication. Efforts to develop a vaccine must continue, and a renewed focus is needed on the less-virulent strain of the malaria parasite, plasmodium vivax. Current efforts focus mainly on plasmodium falciparum, which is responsible for most deaths.

Also needed, Tanner said, are ways to control the Anopheles mosquitoes that infect humans with their bites and new tools to assess how widespread infections are. Detecting and eliminating those final pools of infection is important not only to achieve eradication but also to prevent the disease from spreading again.

Pedro Alonso, director of the Barcelona Centre for International Health Research and chair of the Malaria Eradication Research Agenda, said that efforts toward a malaria vaccine are moving forward, with a candidate vaccine in clinical trials. A vaccine, he said, would be an important tool in fighting malaria, in part because vaccines can be distributed even in places with poor health care infrastructure.

“Historically, they’ve been one of our best public health tools,” Alonso said. “Vaccines get to places where there are no functioning health services.”

International health organizations have set a strategic goal to have a first-generation vaccine that provides 50 percent protection by 2015, and a more effective vaccine with 80 percent efficacy by 2025. The current vaccine is in a large, phase-3 trial to measure its efficacy. The trial involves 16,000 children in seven countries. By 2014, Alonso said, data from the trial should be analyzed.

Other vaccines are in the works, Alonso said. Even if they don’t provide complete immunity, they can help to weaken the disease by reducing the reservoir of infection in an area and cutting the rate at which infections spread.

A closer look at the statistics, however, shows potential pitfalls. While 11 African countries saw deep reductions in cases and deaths, three others saw a resurgence in the disease. Global eradication will require coordinated and sustained efforts to eliminate the parasite wherever it lurks.

“You have to start everywhere,” Tanner said. “If you leave the tough part until the end, you won’t reach your goal.”