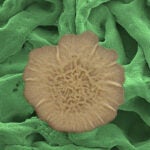 Physicists and bioengineers have developed an optical instrument allowing them to control the behavior of a worm just by shining a tightly focused beam of light at individual neurons inside the organism.

The pioneering optogenetic research, by a team at Harvard University, the University of Pennsylvania, and the University of Massachusetts Medical School, is described this week in the journal Nature Methods. Their device is known as the CoLBeRT (Controlling Locomotion and Behavior in Real Time) system for optical control of freely moving animals, in this case the millimeter-long worm Caenorhabditis elegans.

“This optical instrument allows us to commandeer the nervous system of swimming or crawling nematodes using pulses of blue and green light — no wires, no electrodes,” says Aravinthan D.T. Samuel, a professor of physics and affiliate of Harvard’s Center for Brain Science. “We can activate or inactivate individual neurons or muscle cells, essentially turning the worm into a virtual biorobot.”

Samuel and colleagues chose to work with C. elegans, an organism often used in biological research, because of its optical transparency, its well-defined nervous system of exactly 302 neurons, and its ease of manipulation. They genetically modified the worms so their neurons express the light-activated proteins channelrhodopsin-2 and halorhodopsin.

In conjunction with high-precision micromirrors that can direct laser light to individual cells, the scientists were then able to stimulate (using blue light) or inhibit (using green light) behaviors such as locomotion and egg-laying.

“If you shine blue light at a particular neuron near the front end of the worm, it perceives that as being touched and will back away,” says co-author Andrew M. Leifer, a Ph.D. student in Harvard’s Department of Physics and Center for Brain Science. “Similarly, blue light shined at the tail end of the modified worm will prompt it to move forward.”

The scientists were also able to use pulses of light to steer the worms left or right. By stimulating neurons associated with the worm’s reproductive system, they were even able to rouse the animal into secreting an egg.

Key to the CoLBeRT system is a tracking microscope recording the motion of a swimming or crawling worm, paired with image-processing software that can quickly estimate the location of individual neurons and instruct a digital micromirror device to illuminate targeted cells. Because cells in an unrestrained worm represent a rapidly moving target, the system can capture 50 frames per second and attain spatial resolution of just 30 microns.

“This development should have profound consequences in systems neuroscience as a new tool to probe nervous system activity and behavior, as well as in bioengineering and biorobotics,” Samuel says. “Our laboratory has been pioneering new optical methods to study the nervous system, and this is the latest, and perhaps our greatest, invention.”