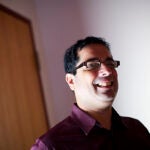 Moving past any obstacles

Trey Grayson, who is completing his second term as secretary of state in Kentucky, has been named director of the Institute of Politics (IOP) at Harvard University. Grayson will assume his post on Jan. 31.

Grayson has garnered praise as one of the nation’s top new political leaders and a “rising star.” He was first elected Kentucky’s secretary of state in 2003 and then re-elected by a wide margin in 2007. He is prohibited by state term limits from running for a third term. Grayson launched a bid for the open U.S. Senate seat in Kentucky in 2010, but was defeated in the Republican primary election. At Harvard, Grayson will succeed former U.S. Sen. John C. Culver (D-IA), who has served as IOP interim director since July 2010.

“Trey Grayson is exactly the right person to lead the IOP as we celebrate the 50th anniversary of my father’s presidency,” said Caroline Kennedy, John F. Kennedy Library Foundation president and IOP Senior Advisory Committee interim chair. “He is an inspirational young leader committed to civic engagement, bipartisan cooperation, and civil debate. I look forward to working with him to inspire the next generation to answer President Kennedy’s call to service.”

As director, Grayson will be charged with setting the strategic vision and budgetary priorities for the long-term direction and affairs of the institute. He will also oversee the myriad activities of the institute, which include a resident fellows program for individuals from active political life; student programs such as internships in public service, research awards, and special projects; educational seminars for elected officials; conferences designed to bring together academic, political, and governmental leaders; and a yearlong series of lectures in the John F. Kennedy Jr. Forum.