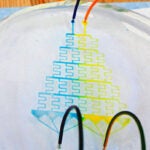 Psychologists at Harvard University have found that infants younger than a year old understand social dominance and use relative size to predict who will prevail when two individuals’ goals conflict. The finding is presented this week in the journal Science.

Lead author Lotte Thomsen says the work suggests that we may be born with — or develop at a very early age — some understanding of social dominance and how it relates to relative size, a correlation ubiquitous across human cultures and the animal kingdom. This potentially innate knowledge may help infants face the formidable challenge of learning the structure of their social environment, specifying ways of recognizing who is socially dominant in their particular culture.

“Traditional kings and chieftains sit on large, elevated thrones and wear elaborate crowns or robes that make them look bigger than they really are, and subordinates often bow or kneel to show respect to superior humans and gods,” says Thomsen, a research fellow in Harvard’s Department of Psychology and assistant professor of psychology at the University of Copenhagen. “Many animals, like birds and cats, will puff themselves up to look physically larger to an adversary, and prostrate themselves to demonstrate submission, like dogs do. Our work suggests that even with limited socialization, preverbal human infants may understand such displays.”

Thomsen and colleagues at Harvard and the University of California, Los Angeles (UCLA), studied the reactions of infants ranging from 8 to 16 months old as they watched videos of interactions between cartoon figures of various sizes.

“Since preverbal infants can’t be interviewed, their experiences and expectations must be assessed by their behavior,” Thomsen says. “Infants tend to watch longer when something surprises them. So we can test hypotheses about what they expect by measuring how long they look at scenarios that either violate or confirm their expectations.”

The researchers showed infants videos depicting a large and a small block with eyes and mouth bouncing across a stage in opposite directions. Next, infants watched the two blocks meet in the middle, impeding one another’s progress. They then saw either the large or the small block bow and step aside, deferring to the other.

“As predicted by our theory, the infants watched much longer when a large agent yielded to a smaller one,” Thomsen says. On average, the babies watched this unexpected outcome for 20 seconds, compared with just 12 seconds when a smaller character made way for a larger one.

In a follow-up experiment, Thomsen and her co-authors found that 8-month-old infants failed to grasp the significance of the larger block deferring to the smaller one. But those who were 10 to 16 months old consistently demonstrated surprise at depictions of a larger individual yielding to a smaller one, suggesting that this conceptual understanding develops between 8 and 10 months of age.

Two other follow-ups showed that infants’ reactions were not simply caused by the expectation that smaller individuals tend to fall over in general, including in situations that do not involve conflicting goals.

“Understanding what makes humans’ rich conceptual repertoire possible is one of the formidable challenges of cognitive science,” says co-author Susan Carey, the Henry A. Morss Jr. and Elisabeth W. Morss Professor of Psychology at Harvard. “Part of meeting this challenge is specifying the initial state: What representational resources are infants born with that enable further learning? Our work shows that, apparently, infants come prepared to understand abstract aspects of their social world.”

In recent decades, scientists have learned that the infant mind creates abstract representations of intuitive physics, psychology, and mathematics. It has also been shown that young infants account for aspects of the social world, such as tracking whether other agents help or hinder third parties. These representations constitute part of what babies need in order to understand collaboration and cooperation in the world.

“The studies we report here are the first to show that young infants also understand events where agents have conflicting goals, and have ways of predicting which of two agents will prevail,” Carey says.

Thomsen and Carey’s co-authors on the Science paper are Willem E. Frankenhuis at UCLA and McCaila Ingold-Smith at Harvard. Their work was sponsored by Harvard, the National Institutes of Health, the Winkler Foundation, and the Danish Council for Independent Research.