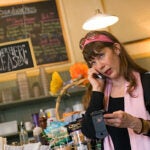 Cancer geneticist Pier Paolo Pandolfi at Harvard-affiliated Beth Israel Deaconess Medical Center (BIDMC) is the recipient of the 2011 Pezcoller Foundation-AACR (American Association of Cancer Research) International Award for Cancer Research. This is the second time in the award’s 14-year history that a BIDMC investigator has received this prestigious honor, which was established in 1997 to recognize a scientist of international renown who has made a major scientific discovery in either basic or translational cancer research and whose ongoing work holds promise for progress in the field of cancer.

Pandolfi joined the BIDMC faculty in 2007, and he serves as chief of the division of genetics in the department of medicine, director of research in the BIDMC Cancer Center, and director of the cancer genetics program. The George C. Reisman Professor of Medicine at Harvard Medical School, Pandolfi was recognized by the foundation and the AACR both for his outstanding work in the field of cancer genetics and for his groundbreaking development of cancer mouse models.

“Dr. Pandolfi’s research has led to major breakthroughs in our essential understanding of how mutations in oncogenes and tumor suppressor genes result in leukemias, lymphomas, and solid tumors,” said BIDMC Cancer Center Director Lewis Cantley, who received the Pezcoller award in 2005. “His pioneering work in developing transgenic mouse models of cancer helped lead to novel therapeutic strategies for acute promyelocytic leukemia [APL], and, today, this unique expertise in mouse-model engineering is helping to speed the clinical testing of new personalized cancer therapies.”

Pandolfi will deliver an award lecture titled “The Non-Coding Revolution: A Coding-Independent Function of Gene and Pseudogene mRNAs Regulates Tumor Biology” during the 102nd Annual Meeting of the AACR in Orlando, Fla., this spring.