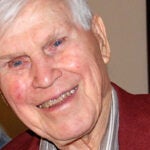 At its 217th semiannual meeting in Seattle, the American Astronomical Society named the recipients of its 2011 prizes for achievements in research, instrument development, education, and writing.

Robert P. Kirshner, Clowes Professor of Science in the Department of Astronomy, was awarded the Dannie Heineman Prize in Astrophysics, given in partnership with the American Institute of Physics, which recognizes outstanding work by midcareer astronomers. The Newton Lacy Pierce Prize for outstanding achievement in observational research by an early-career astronomer went to Gaspar Bakos of the Harvard-Smithsonian Center for Astrophysics.

Kirshner was praised “for his sustained and enduring contributions to our understanding of supernovae and cosmology.” The award committee called special attention to Kirshner’s work with students using supernova light curves as calibrated standard candles, which has provided evidence for an accelerating expansion of the universe.

Gaspar was awarded “for the impact he has had on the study of exoplanets, his contributions to our understanding of the unexpected diversity of exoplanet properties, and the extraordinary entrepreneurial spirit and capability he has shown in the development of one of the most successful systems for detecting transiting extrasolar planets.”

For a complete list of all the awards and winners.