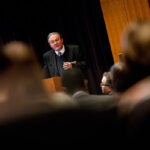 Plotting the demise of malaria

Research may be a first step toward better care

It has long been a given that adult humans — and mammals in general — lack the capacity to grow new nephrons, the kidney’s delicate blood filtering tubules, which has meant that dialysis, and ultimately kidney transplantation, is the only option for the more than 450,000 Americans who have kidney failure.

But a new study by Harvard Stem Cell Institute researchers and collaborators at the University of Pittsburgh may turn that paradigm on its head, and someday lead to a new treatment for those suffering from kidney disease.

Led by Alan J. Davidson, an assistant professor at Harvard Medical School at the time the research was conducted, a collaborative team from Brigham and Women’s Hospital and Massachusetts General Hospital’s Center for Regenerative Medicine has identified adult kidney stem cells in the zebrafish that can generate new nephrons. These cells can be transplanted from one fish to another fish, whereby they grow into functional nephrons in the transplanted recipient.

The study, published online this week (Jan. 26) in the journal Nature, “provides a proof of principle that adult kidney stem cells exist in nature and that treating renal disease with a stem cell-type therapy is theoretically possible,” said Davidson, interviewed by phone in his native New Zealand, where he is now an associate professor in molecular medicine and pathology at the University of Auckland.

Zebrafish are a commonly used animal model for studying organ development and various diseases because of the ease with which they can be genetically manipulated and because they are transparent in their larval stages. Researchers can literally look inside live fish and watch as their organs develop and function. In this case, working with specially developed zebrafish from the University of Pittsburgh that had fluorescent renal stem cells, the research team, which included Robert I. Handin, a Harvard Medical School professor of medicine and co-director of the Hematology Division at Brigham and Women’s Hospital, was able to watch the cells grow into new nephrons in real time.

“Investigators have been searching for the adult renal stem cell in mice and humans for some time, but so far the results have been controversial,” said Davidson. There is a general belief that while there are kidney stem cells in mammals, including humans, they generate nephrons and then disappear during fetal development or soon after birth. “The mystery,” said Davidson, “is why these particular cells aren’t retained in the adult kidney, where they could be called upon to make new nephrons.”

The researchers found that when the kidney stem cells were transplanted, they began generating new nephrons, and those nephrons could then successfully be transplanted into other zebrafish, demonstrating the continuing ability of the stem cells to generate nephrons.

While it’s a long way from the zebrafish kidney to a human treatment for kidney disease, Davidson notes, “There are many organs and tissues that have a genetic program that is shared between fish and mammals. Our work has demonstrated the therapeutic potential of adult renal stem cells; the next step is to apply this knowledge to mammals in order to isolate or induce the equivalent cell type.” The prospect of a cell-based therapy to regenerate aged or diseased kidneys has an obvious clinical appeal and may lead to better treatment for the millions of people worldwide struggling with chronic kidney disease.

The study was funded by the Harvard Stem Cell Institute, the American Society of Nephrology, and the National Institutes of Health through the Harvard Center for Polycystic Kidney Disease Research, among other organizations.