Waves and the waggle dance 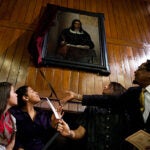 From a peacock’s tail feathers to a firefly’s flashing posterior, to schools of flatulent herring and the honeybee’s waggle dance, the animal kingdom is rife with examples of “behind-the-scenes” conversation.

With that as a hook, Howard Stone, Dixon Professor of Mechanical and Aerospace Engineering at Princeton University and a former Harvard faculty member, enticed children and their families into the world of physics and biology.

The lecture, titled “Good Vibrations: How We Communicate” and hosted by the Harvard School of Engineering and Applied Sciences (SEAS) on Dec. 11, was designed to give kids a grounding in the physics of vibrations and sound waves.

The event began with a game of “Telephone,” to introduce the idea that communication is simply a message going from one place to another.

“All we need is something going back and forth,” said Stone.

He then turned the audience into a human wave, with each row standing up in turn. “You went up and down in your seat,” he pointed out, “but the wave traveled from the front of the room to the back.”

Young and old alike were delighted by videos of a monarch caterpillar rubbing its tail end across a leaf, producing a threatening stamping noise; the bobtail squid, which hosts bioluminescent bacteria that glow at night to help camouflage it against the moonlight above; and, of course, the school of herring, which gulp air from the surface of the sea and release it in the form of flatulence to communicate at night (a discovery which earned an Ig Nobel Prize in 2004).

Even the bobtail squid’s bacteria, Vibrio fischeri, communicate with each other. Using a process known as quorum sensing, they interpret varying concentrations of chemical signals and respond by glowing at night and “switching off” during the day.

Signals can manifest themselves in many ways, but Stone wanted the audience to understand, in particular, the physics of sound.

With help from Daniel Rosenberg, a research assistant at SEAS who coordinates physics and chemistry demonstrations, Stone showed that sound waves can be made visible. Rosenberg set up a speaker at the end of a long glass tube of oil. When he played a low note through the speaker, the oil began to dance and splatter at certain points along the tube. With a deeper note, different points responded.

“Can you really break a wine glass with sound?” asked Stone. “What do you think?”

Choruses of “Yes!” and “No!” broke out across the audience, so Stone and Rosenberg set up a glass and a speaker. Using a close-up camera and a strobe light, they projected the glass’s dramatic stretching, wobbling movements onto a screen at the front of the auditorium. With just the right sound, its resonant frequency, the glass did, indeed, shatter.

In past years, the holiday lectures have covered the science of pizza, candles, germs, and chocolate.

“This year,” said Rosenberg, “we were trying to do something with some physics demos, and communication naturally goes on top of doing waves.”

To demonstrate the concepts of transverse and longitudinal waves, Stone brought a group of about 40 children up to the stage and had them link together, shoulder to shoulder. Swaying either forward and back or side to side, they played the role of particles in motion.

“If the kids can walk out at age 8 and know the difference between transverse and longitudinal waves, that’s great,” said Rosenberg.

Abby Faas-Bush, 8, was looking forward to getting home and sharing her new knowledge of physics with her older sister. “Guess what,” she said, with a touch of pride: “My sister is studying that in high school!”

“It’s great for kids to see that if they look around, they’ll find science all around them,” said Kathryn Hollar, director of educational programs at SEAS. “Hopefully, it’s sparked their creativity.”

Now a longstanding tradition that attracts more than a thousand community members, the holiday lecture was a team effort between Stone, Rosenberg, and Hollar; Peter Girguis, John L. Loeb Associate Professor of the Natural Sciences in the Department of Organismic and Evolutionary Biology at Harvard; Bonnie Bassler, Squibb Professor of Molecular Biology at Princeton University; David Steinberg, director of education outreach for the Princeton Center for Complex Materials (PCCM); and Shannon Greco, education outreach coordinator for PCCM.