The ripples of Brown v. Board 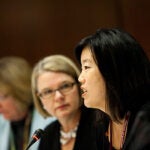 Martha Minow, a legal scholar and the dean of Harvard Law School (HLS), offered some advice to authors: “Write out of anger. It keeps you going.”

She felt ire and dismay over commentary during the 50th anniversary discussions of Brown v. Board of Education of Topeka, the unanimous 1954 Supreme Court decision that declared de jure segregation of public schools unconstitutional. Disproportionately, said Minow, that commentary called the decision a failure. So she set out to write a book that acknowledged its limitations but celebrated its achievements. The result was “In Brown’s Wake: Legacies of America’s Educational Landmark” (Oxford University Press).

The book, published this year, was the cornerstone of an afternoon-long discussion on Saturday (Dec. 4) by two panels sponsored by the Mahindra Humanities Center at Harvard. (The center has set out to accelerate dialogue between law and the humanities, in an “emerging discourse and collegiality,” said Director Homi Bhabha, Harvard’s Anne F. Rothenberg Professor of the Humanities.)

He introduced Minow, whose work on mass conflict and genocide, as well as on the legal underpinnings of integration, always takes into account “the other person just beyond the fold.” Bhabha praised her life’s aspiration, “an ideal of civil society” that nonetheless remains “a complex work in progress.”

The Brown case itself is a metaphor of that “complex progress,” which Minow acknowledged. Are schools now more racially segregated today than in 1954? Yes, she said, but the legacy of Brown remains “worthy of comment and correction.”

For one thing, the decision affirmed a cultural commitment to tolerance and equal opportunity, opening the door to later legislation that eased educational access for girls, for students with disabilities, and for students from other cultures struggling to learn English. “I wanted to give Brown its due” especially on the issue of race, said Minow. “Before Brown, we lived in a country that had an apartheid.”

That American apartheid was so deep before Brown, she said, that even the summertime storage of textbooks was separate on racial grounds.

Today, the landmark decision leaves a few basic questions in its wake, said Minow: Why did school integration fail? Is integration necessary for equality? What is the “social meaning” of membership? And if you care about integration, what are the means to do something about the issue?

Despite the importance of Brown, said Minow, it is unlikely that courts alone can “produce social change around something as fundamental as how people view one another.” The law is “more like a fence than a spur for interchange,” she said, making a bridge between law and the humanities all the more critical.

“Don’t let lawyers lead the revolution,” said Lani Guinier, the Bennett Boskey Professor of Law at Harvard Law School, lamenting that law schools train more “technicians” than storytellers. “I don’t think the precedent [for equality] is going to be a legal precedent.”

Any discussion of equality has to include the issues of “economics and power,” she said, since in America, race is used to mask the inequalities of class. In the end, Brown — careful and sedate — is “an unfortunate example of lawyering,” said Guinier.

Randall Kennedy, the Michael R. Klein Professor of Law at HLS, said Brown, as actually written, has “all the moral grandeur of a bill of lading. He was quoting historian Richard Hofstadter, who said the same of Abraham Lincoln’s Emancipation Proclamation, another iconic document of racial freedom whose prose does not match the poetry of its vision.

Minow is a reformer who wants to “reclaim integration as an aspiration,” said Kennedy. She sees Brown as a “banner for social inclusion” that flies overhead for the world to see, he explained. “But let’s be clear,” the historical decision “doesn’t match that vision.” It’s a “sacred text” that eliminated de jure segregation, he said, but failed to praise the ideal of integration even once.

“How far can we expect to get by turning to Brown?” Kennedy asked. Not far. “We are going to have to look forward,” he said, “and create the precedents we want.”

“Brown has been a great source of slogans,” said legal philosopher Ronald Dworkin. But now “it’s time to set those slogans aside … We not only need new slogans, we need new doctrines.” (Dworkin, who has joint appointments at New York University and University College London, delivered a Dec. 3 Mahindra Humanities Center lecture on the law and moral interpretation.)

But the reforms inspired by Brown in the 1970s are “disintegrating,” she said. Judges are narrowing interpretations of disparate impact: the idea that a policy or law has a greater effect on one group or another. In “the last turn of the screw,” said Siegel, judges are imposing more limitations on what Congress can do about de facto bias, putting the ideals behind Brown “constitutionally in peril.”

“Maybe history has revealed mistakes” in Brown, said Kennedy. “There are limits to coerciveness.”

So what does Brown have to offer in the first decade of the 21st century? Perhaps its own iconic status.

“Capitalize on that ‘sacred text’ in a way that makes it the best perfection of statecraft it can possibly be,” said Dworkin. “Let’s not throw Brown over. It’s a great gift.”