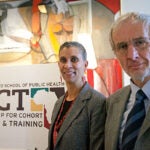 Harvard researchers have illuminated how the brain processes information about odor, linking a temporal pattern of electrical spikes traveling through the nervous system with specific smells and behaviors in laboratory animals.

In the first such research done on awake, moving animals, Naoshige Uchida, an associate professor of molecular and cellular biology, and graduate student Kevin Cury tracked the effects of single sniffs in an area of the brain called the olfactory bulb, which receives and processes odor information from rats’ noses.

The two researchers found that, contrary to the conventional view that information on smell is contained in the number of neural spikes per unit of time within the olfactory bulb, the temporal pattern of those spikes over time appeared to be most important in relaying information from the nose to other parts of the brain. The researchers found these patterns to be reproducible in separate trials that involved the same rats sniffing the same odors at different times. They also found that the patterns could be tracked to a behavioral response in the trained animals.

“The use of behavior allows us to look at neural activity and behavior, and, if they match with each other, we can say that certain neural codes apply to behavior. We are the first to show that temporal code is associated with behavior,” Uchida said. “This is a very powerful approach.”

The research, published in the Nov. 4 issue of the journal Neuron, took three years to complete, mainly because the subject animals had to be trained extensively to perform two odor-based tasks before the trials could begin. Uchida said similar research performed on anesthetized animals can be conducted much more quickly, but doesn’t allow researchers to make the link between odors, neural spike patterns, and behaviors.

Uchida demonstrated in 2003 that a single sniff lasting just a fraction of a second was enough to impart odor information in a laboratory animal.

In the current work, lab rats were trained at odor-discrimination tasks, where they had to move left or right after detecting certain scents. Researchers implanted tiny electrodes in the animals’ brains and put temperature sensors in their nasal cavities. The temperature fluctuations in their noses represented fresh drafts of air, researchers said, which allowed them to coordinate the timing of electrical spike patterns in the brain and the animals’ sniffs.

They conducted three different experiments. The first looked at the responses of neurons in the animals’ brains while the rats engaged in an odor-discrimination task, showing that it took just 100 milliseconds for the odor to be encoded and transferred to the brain. In the second, the researchers examined the variability in the animals’ response times to determine that the temporal pattern of the spikes, not the overall spike count, was important in how quickly the rats responded to particular odors. In the third, the researchers compared the responses of the same sets of neurons to different smelling activities — one a quick, high-frequency sniffing, and the second a passive, slow breathing. Results of the last experiment showed that spike patterns were similar in the presence of the same odors, regardless of the type of sniffing behavior, bolstering the idea that the patterns are key in transmitting odor information.

Cury will graduate in 2011, but Uchida plans to continue this research, using special light-activatable ion channels to test how the downstream areas of the brain read out the pattern of activity sent from the olfactory bulb.