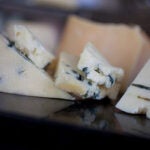 Dairy fat may help not harm

Study says ability to recognize others peaks shortly after age 30

Scientists have made the surprising discovery that people’s ability to recognize and remember faces peaks at ages 30 to 34, about a decade later than most other mental attributes.

Researchers Laura T. Germine and Ken Nakayama of Harvard University and Bradley Duchaine of Dartmouth College will present their work in a forthcoming issue of the journal Cognition.

While prior evidence suggested that face recognition might be slow to mature, Germine said few scientists had suspected it might continue building for so many years into adulthood. She said the late-blooming nature of face recognition simply may be a case of practice making perfect.

“We all look at faces and practice face-watching, all the time,” said Germine, a Ph.D. student in psychology. “It may be that the parts of the brain we use to recognize faces require this extended period of tuning in early adulthood to help us learn and remember a wide variety of different faces.”

Germine, Duchaine, and Nakayama used the web-based Cambridge Face Memory Test (available at http://www.testmybrain.org) to test recognition of computer-generated faces among 44,000 volunteers ages 10 to 70. The researchers found that skill at other mental tasks, such as remembering names, maxes out at ages 23 and 24, consistent with previous research.

But on a face-recognition task, the skill rose sharply from ages 10 to 20, then continued increasing more slowly throughout the 20s, reaching a peak of 83 percent correct responses in the cohort ages 30 to 34.

A follow-up experiment involving computer-generated children’s faces found a similar result, with the best face recognition seen among individuals in their early 30s. After this, skill in recognizing faces declined slowly, with the ability of 65-year-olds roughly matching that of 16-year-olds.

“Research on cognition has tended to focus on development, to age 20, and aging, after age 55,” Germine said. “Our work shows that the 35 years in between, previously thought to be fairly static, may in fact be more dynamic than many scientists had expected.”

Germine, Duchaine, and Nakayama’s research was sponsored by the National Science Foundation and the Economic and Social Research Council.