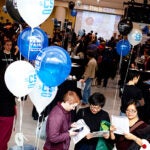 Engineers at Duke and Harvard universities have developed a “magnetic sponge” that after implantation into a patient can “squeeze” out drugs, cells, or other agents when passed over by a magnet.

The researchers demonstrate that the new material — called a macroporous ferrogel — can be compressed as much as 70 percent by an applied magnetic field. The reversible compression quickly forces out the drugs, cells, or proteins embedded in the ferrogel.

While porous biomaterials are used today as scaffolds for tissue regeneration and cell therapy, they are mostly passive in that the drug or cells usually diffuse or migrate out of the materials. The new scaffold the Duke and Harvard engineers have developed, on the other hand, can be controlled by external cues to release drugs and cells on command.

The macroporous ferrogel contains magnetic iron nanoparticles, which respond to magnetic fields. Just as important, the researchers said, the new ferrogel has much larger pores than existing ferrogels.

“These bigger pores allow us to use drugs with larger molecules such as proteins and cells, and result in a much more significant squeeze when in the presence of a magnetic field,” said Xuanhe Zhao, assistant professor of mechanical engineering and materials science at Duke’s Pratt School of Engineering. Zhao performed much of the work while a postdoctoral fellow at the Harvard School of Engineering and Applied Sciences (SEAS) in the laboratory of David Mooney, Robert P. Pinkas Family Professor of Bioengineering and a core member of the Wyss Institute for Biologically Inspired Engineering at Harvard.
The large pores were created by freezing the ferrogel.

“When you freeze a gel, the water inside it crystallizes and damages part of the gel,” Zhao said. “After melting, a ‘hole’ is left behind. By varying the temperature and the duration of the freezing, we can control the size of the pores.”

“Unlike conventional scaffolds, our ferrogel gives us a great deal of active control over whatever it is to be administered,” Zhao said. “For example, we can vary the size of the pores or the level of magnetism, depending on how the ferrogel is processed.”

The results of the study were published online in the Proceedings of the National Academy of Sciences.
The scientists tested ferrogels loaded with human and mouse cells in animal models, and were encouraged by the way the ferrogel responded to magnetic stimulation.

“This is the first demonstration, to the best of our knowledge, of the use of these porous ferrogels for controlled cell delivery,” Mooney said. “More broadly, this provides the first demonstration of on-demand release of cells from porous scaffolds, which could lead to widespread use in tissue regeneration and other cell therapies.”

Mooney also said it would be possible to place living cells within the ferrogels that could conceivably produce new cells for years.

“While this particular study focused on the ability to deliver drugs and cells on demand, we also expect that these ferrogels could have much wider applications, including serving as actuators and sensors in biomedical and other areas, thanks to their large and quick volume change under magnetism,” Mooney said.

These ferrogels are made of a biodegradable substance, so they would not need to be removed, the scientists said.

Other members of the research team were Jaeyun Kim, Christine Cezar, Nathanial Huebsch, Kangwon Lee, and Kamal Bouhadir, all from Harvard. The research was supported by the National Institutes of Health, the Defense Advanced Research Projects Agency (DARPA), Harvard, and Duke.