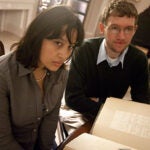 In the United States, large, long-running studies provide clues about people’s health, highlighting ailments such as diabetes, heart disease, and cancer, while providing a starting point for research and interventions.

That’s not the case in Africa. Despite the enormous burden of disease there and the rise of what were traditionally considered diseases of industrialized nations, there are almost no broad population studies that might provide guidance for policies and priorities.

A group of researchers at the Harvard School of Public Health is seeking to change that, taking aim at chronic ailments such as diabetes, heart disease, and cancer through a major cohort study like those that have illuminated important trends in the U.S. population’s health.

Led by Epidemiology Department Chair Hans-Olov Adami and Associate Professor of Epidemiology Michelle Holmes, the effort — called the Africa/Harvard School of Public Health Partnership for Cohort Research and Training — is seeking to enroll 500,000 people from four African countries: Nigeria, South Africa, Uganda, and Tanzania. The massive project will track people’s health, with a focus on what investigators expect will be a rising “tsunami” of chronic ailments.

After decades of public health focus on infectious diseases, Africa’s population is in the midst of a demographic and epidemiological shift like that that has already occurred in industrialized countries. The population is getting older and, while infectious disease hasn’t been conquered — as the AIDS epidemic emphatically shows — chronic ailments that typically appear later in life are showing up with greater frequency.

“This is what we call an epidemiological transition,” Holmes said. “You have to live long enough to get a chronic disease.”

In addition, the spread of the less-healthy Western diet and sedentary lifestyle has led to a rise in the heart disease, diabetes, and obesity linked to that.

“It’s probably one of the biggest experiments in lifestyle ever conducted in the history of man,” Adami said.

Holmes, Adami, and a handful of faculty collaborators at Harvard have spent the past three and a half years laying the groundwork for the study, which they say is a partnership with African researchers that will rely heavily on African collaborators. The organizers have met with the ministers of health in the four nations, have identified African researchers who will work on the study, and have created staffed centers in each country where smaller pilot studies are being conducted. In addition, Adami and Holmes said, the project will provide ample opportunity to train African collaborators and staff at several levels, from providing doctoral research projects for aspiring researchers to job training for frontline staff.

Before the survey can take off, however, it needs to be funded. Adami said the organizers are seeking funding sources for the $500,000 needed for the next phase, which is just a fraction of the estimated $100 million the project is expected to cost over the decade. They are reaching out in a variety of ways, including a push to use social media to raise small amounts from many donors.

While that is a lot of money, Holmes pointed out that if society prioritizes such actions, money can be found. After all, she said, it’s what a single big-time athlete earns through a major contract.

Harvard has a long tradition of successful cohort efforts, starting with the venerable Nurses’ Health Study, begun in 1976 to investigate the effects of long-term use of oral contraceptives by women. The study enrolled 122,000 nurses in 11 states and followed them for decades, with the scope of questions expanding over time. That study has been followed by ones involving younger groups, whose results continue to add to scientific knowledge about health and disease.

“The Harvard cohorts have greatly informed health policy in this country. It’s a crime to have a whole continent without the benefit of that [information],” Holmes said.

Once funding is found, Adami said it will take about a year to scale up the pilot infrastructure for the study. The project will likely employ hundreds of people and consists not only of questionnaires, but also collecting tissue samples from participants.

Technology will likely play an important role, Holmes said, as researchers consider the best way to keep track of study participants and collect health information from them. Traditional paper questionnaires may not be the best route, she said, and organizers are considering using cell phones — becoming more common in Africa because they bypass the expensive and labor-intensive need to run phone cables to homes — as a way to keep in touch, either by speaking to a participant or texting them.

Organizers are also hopeful that they can coordinate the effort with several similar studies going on in other countries, including Mexico, Sweden, and India, to make the results comparable across studies.