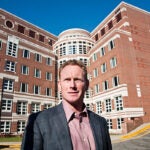 Nov. 1 was a bitter day on the ice. The Harvard men’s hockey season kicked off with a game against the Swedish National Under-20 team, which the Crimson failed to outscore.

Four days later, Harvard lost again — 2-1 to Union College — and was off to a start consistent with last season’s disappointing performance. The Crimson won just nine games back-to-back in 2009 and 2008 — a crushing collapse after coach Ted Donato’s successful 2004-07 run.

“You certainly tweak your systems and strategies every year based on what has and hasn’t worked in the past and your personnel, but, for the most part, we believe in the approach we’ve been taking,” said Donato in a mid-November interview. “We want to change our results by working harder every day, paying attention to detail, and continuing to improve as the season progresses.”

The Crimson rebounded with wins over Rensselaer Polytechnic Institute on Nov. 6 and St. Lawrence University on the 12th, but their momentum vanished in a seven-game losing streak against Clarkson, Princeton, Quinnipiac, Dartmouth, and Merrimack.

Donato ’91, a Crimson star who was drafted by the Boston Bruins and went on to a long career in the NHL, thinks his squad is capable of steadier play.

“We’re confident that if we focus on continuing to improve, we’ll have success and we’ll be competitive within our league and on a national level,” said Donato. “We expect everyone involved in our program to show a commitment to getting better every day. We want to give ourselves a chance to win every game.”

The coach is looking to captains Michael Del Mauro ’11 and Chris Huxley ’11, both forwards, and assistant captain/goalie Kyle Richter ’11 to set the tone.

“We have great leadership all over the ice,” he said.

Donato, now in his seventh year as coach, says the transition from player to coach “has been smooth sometimes and rocky at other times.”

“I’ve been lucky enough to have some success here, but there have also been some growing pains,” he said. “I had an incredible experience here as a student-athlete, and Harvard hockey holds a special place in my heart. We’re confident that if we focus on continuing to improve, we’ll have success and we’ll be competitive within our league and on a national level.”

“I think I’ve learned a lot of lessons through those tough times and am a better coach for it now.”