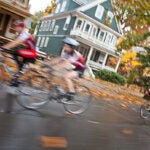 They ride by dawn

Setting a fresh course for the future of the Harvard library system, University leaders have embraced a series of recommendations from the Library Implementation Work Group to establish a coordinated management structure and increasingly focus resources on the opportunities presented by new information technology. Provost Steven E. Hyman and Professor David Lamberth, who led the implementation group, discussed the 21st century vision for the libraries.

GAZETTE: Do you see the steps announced today (Dec. 1) as a refashioning of the existing system, or is this an entirely new structure?

GAZETTE: So it’s not so much a stark break with the past as a repositioning. What are some of the elements from the existing system that will be built upon?

LAMBERTH: The shift with regard to the collections is really taking this vast wealth of resources that we have across the University, and beginning to look at them and manage them and present them to the patrons as a coherent integrated collection.

We’ll be taking advantage of the many different and wonderful facilities of the libraries across the University, which will in large part, we expect, remain places where patrons do their work and study and access the collections.  But at the same time, we’ll be building a more integrated digital portal into those collections, which is how we all now begin our searches for information.

GAZETTE: What provoked this change?  Was it driven by finances?

HYMAN: The concerns that led to the initial Task Force on University Libraries long antedated the financial downturn, although the downturn highlighted for us the need to re-evaluate the organization. In fact, the faculty were asking questions about the excessively complex nature of our organization many, many years before the financial downturn, based on challenges in accessing material and on sometimes cumbersome decision-making.

GAZETTE: The dramatic changes in information technology were a key factor in the original task force report. Are those changes the driving force here?

LAMBERTH: I think it’s a crucial component.  The world of libraries increasingly has been wedded to digital tools, resources, media, and possibilities for the past 20 to 30 years.  The ability to engage broad-scale digital strategies from a largely decentralized posture has become more and more problematic over the years.  The expectations of our users have grown higher and higher because of the way the nonlibrary world has digitized.

HYMAN: Yes, and implicit in what you’re saying is that it’s very important to have a nimble decision-making structure to adapt to patrons’ changing expectations.

GAZETTE: So let’s say we have our nimble decision-making structure in place now.  What does the premier research library of the 21st century look like?  What does it do that our libraries don’t do now?

LAMBERTH: What we don’t do right now is present a virtual portal that really gives any patron range over the whole scope of Harvard’s assets, and we don’t actively try to collaborate and connect our patrons to the resources that other universities have as well.

HYMAN: Yes, that’s exactly right.  A great 21st century library is collaborative both internally and externally, because no one can possibly afford to collect everything, and no one has expertise to identify everything that’s important.  Just as David said, we want our patrons to be able to find anything at Harvard, whether it’s a book, whether it’s a digital copy of a journal, whether it’s a database, or whether it’s an object in one of our museums. We must also be full-fledged members of consortia so that what we don’t own is also at the fingertips of our students and faculty.  That will increasingly be an expectation at any great university.

There is a second thing that David has been alluding to, which is there has to be a deep and effective connection between our informational resources that are instantiated in the library and our pedagogy.  It’s not just a research tool.  So that the library should facilitate the development of new courses, the updating of materials for existing courses, and not simply in terms of traditional books and journals, but the whole variety of remarkable objects and databases that we have here at Harvard.

GAZETTE: So what are some of the structural steps that you have to take to get from where we are to where we need to be?

LAMBERTH: Well, one of the keys that the implementation group has identified is the need for a robust and accountable governance structure for the libraries that’s able both to be agile and to act on behalf of the University as a whole.

So one of the first moves we need to make is to establish a Library Board and begin to develop a core team who will provide leadership for the whole system. And then, from there, begin to see the shape of what we can do, what we need to do centrally versus what we continue to do locally in all of the library units.

It’s going to mean, over time, that every role in the libraries feels some effect from this change.  Though, depending on where you work and what kind of jobs you do, some of the roles will remain quite similar and some will change significantly in light of this.

HYMAN: I think it’s really important to add that we want to respect in the new organization what’s best in our decentralized history, which is local intellectual expertise and knowledge of the needs of students and faculty, while we add what one gains from a more coordinated management structure: the ability to make decisions effectively and implement them.  One key is to have a board to whom the library director is responsible that represents the needs of our Schools.

GAZETTE: Can you talk a little bit about some of the tangible benefits of a more coordinated management structure?

LAMBERTH: One of the things we found is that the changes that have come into the practices of libraries are changes that largely scale — in the sense that the larger the organization gets, the more effectively it can do that. There are several simple examples.  Your ability to negotiate with a vendor for materials becomes stronger, the larger the number of dollars you’re going to spend is.

We currently function in our decentralized systems as dozens of purchasing units.  We function as dozens of processing units.  And the notion here is that there are a number of activities that are so similar across these multiple libraries that if we bring them together and leverage the benefit of size in these cases, we’ll be able to use some of our resources to other ends within the libraries.

GAZETTE: What do members of the library staff have to look forward to as these changes unfold over the coming months?

LAMBERTH: I think there really is an exciting future ahead for the staff in trying to position the whole library organization onto more of a forward-looking and innovative front foot. There is already a lot of innovative work being done throughout the system.  Part of what we want to do is think about how we can build on that. What’s next? How can we improve on what we can deliver to faculty and students and researchers?  How can we think about how better to interface the digital and the physical and the artifactual collections that we have?  How do we think about where we’re going to be 20 years from now and position ourselves to be where we want to be in that time period? Currently that happens in some parts of the University library system, but it’s not widely distributed as a challenge for staff at all levels to be thinking about.

HYMAN: We have a remarkable and talented library staff.  And I know that any large-scale change like this can provoke anxiety. But above all, it ought to be exciting as we all work together to build a great 21st century library.