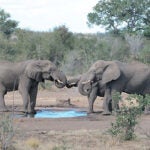 For most of us, the “placebo effect” is synonymous with the power of positive thinking; it works because you believe you’re taking a real drug. But a new study rattles this assumption.

The study is published Dec. 22 in PLoS ONE.

Placebos — or dummy pills — are typically used in clinical trials as controls for potential new medications. Even though placebos contain no active ingredients, patients often respond to them. In fact, data on placebos is so compelling that many American physicians (one study estimates 50 percent) secretly give placebos to unsuspecting patients.

Because such “deception” is ethically questionable, HMS Associate Professor of Medicine Ted Kaptchuk teamed up with colleagues at BIDMC to explore whether the power of placebos can be harnessed honestly and respectfully.

To do this, 80 patients suffering from irritable bowel syndrome (IBS) were divided into two groups: one group, the controls, received no treatment, while the other group received a regimen of placebos — honestly described as “like sugar pills” — which they were instructed to take twice daily.

“Not only did we make it absolutely clear that these pills had no active ingredient and were made from inert substances, but we actually had ‘placebo’ printed on the bottle,” says Kaptchuk. “We told the patients that they didn’t have to even believe in the placebo effect. Just take the pills.”

For a three-week period, the patients were monitored. By the end of the trial, nearly twice as many patients treated with the placebo reported adequate symptom relief as compared with the control group (59 percent vs. 35 percent).  Also, on other outcome measures, patients taking the placebo doubled their rates of improvement to a degree roughly equivalent to the effects of the most powerful IBS medications.

“I didn’t think it would work,” says senior author Anthony Lembo, HMS associate professor of medicine at BIDMC and an expert on IBS. “I felt awkward asking patients to literally take a placebo. But to my surprise, it seemed to work for many of them.”

The authors caution that this study is small and limited in scope and simply opens the door to the notion that placebos are effective even for the fully informed patient — a hypothesis that will need to be confirmed in larger trials.

“Nevertheless,” says Kaptchuk, “these findings suggest that rather than mere positive thinking, there may be significant benefit to the very performance of medical ritual. I’m excited about studying this further. Placebo may work even if patients know it is a placebo.”

This study was funded by the National Center for Complementary and Alternative Medicine and the Osher Research Center, Harvard Medical School.