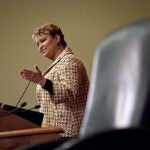 Economics professor describes a brain in conflict with itself

We resolve to exercise more, but end up in front of the TV at the end of the day instead of at the gym. We promise to clean up our diet and then overindulge at the office holiday party. We pledge to put money away for retirement, but end up maxing out credit cards that charge 14 percent interest.

According to David Laibson, Robert I. Goldman Professor of Economics at Harvard’s Faculty of Arts and Sciences (FAS), we struggle with ourselves in these ways and others because of the conflict between our two minds — one patient and forward-looking, another impatient and bent on immediate gratification. Laibson presented this model of “multiple selves” to an enthusiastic audience that filled Yenching Library on Dec. 2 for the 2010-11 Mind Brain and Behavior Distinguished Harvard Lecture.

Laibson began his presentation by engaging the audience in an experiment: Imagine you’re at a spa right now. You’re offered two options—a 15-minute massage now or a 20-minute massage in an hour. Both are free. Which would you choose? About a third of the audience chose immediate gratification.

Then Laibson made one change to the scenario. Imagine that the clerk at the spa offers you a 15-minute massage in one week at 2 p.m. or a 20-minute massage on the same day at 3 p.m. Although the interval between the massages was the same, the audience unanimously chose to wait the extra hour and get the 20-minute treatment.

For traditional economists, this result makes no sense. “According to classical economic theory, consumers should discount future benefits at a constant exponential rate,” Laibson said. “The value of a reward should decline at a constant rate, regardless of the horizon.” Translation: If an earlier massage is preferred today than it should also be preferred in a week.

Yet Laibson presented study after study that contradicted this prediction. Dutch workers choose healthy snacks one week in advance, then flip-flop and choose chocolate on the day of delivery. Students choose lowbrow movies to watch tonight, but schedule highbrow films for a week from now.

“Research shows that there’s a high rate of discounting in the short run, then virtually no discounting as people look further into the future,” he said. “A student thinks about when to do a problem set. ‘If I do it today, I pay full price in terms of the psychological effort. If I move it one day into the future, it becomes half as miserable in expectation.’ But then the student reaches the day of action, and postpones the work once again.”

Laibson said that the source of this internal struggle lies in two parts of the brain that literally sit on top of one another. The mesolimbic dopamine reward (MDR) system is concrete and immediate. This part of the brain will “gladly pay you Tuesday for a hamburger today,” as Popeye’s sidekick Wimpy used to say, because Tuesday doesn’t really matter.

Above the MDR system, though, is the prefrontal cortex (PFC). This part of the brain sees tomorrow essentially the same as it sees today. The PFC is that voice in your head telling you that the cupcake you want to scarf down at the holiday party is going to wind up around your midriff, so better steer clear. It’s the part of us that nutritionists and counselors are speaking of when they tell us to “eat mindfully.”

“The cortical system has an ability to wait and weigh benefits,” Laibson said. “There’s very little discounting. The PFC is the part of the brain that says we shouldn’t mortgage the future for the present. The MDR discounts rapidly. It puts a lot of weight on the present, but little on the future.”

Brain scans provide more evidence. In one study, participants were broken up into two groups. One group was asked to choose between a $20 Amazon.com gift certificate in a month and a $30 gift certificate in two months. Another was offered the same set of choices, only the time frame for the two gift certificates was now and one month. Pictures of the brains of participants offered the immediate gratification consistently showed activity in the mesolimbic area. Those offered choices in the future showed much less MDR activity.

“The patient brain seems to be discounting about 1 percent per minute,” Laibson explained. “But the impatient brain has a 4 percent minute-to-minute discount rate. The combined function produces paradoxical behavior.”

So, how can we quiet the part of our brain that wants to blow up our holiday budget and put that iPad on the credit card? Laibson had no easy answers, but quoted another study that may help households and policymakers create systems that reinforce the patient brain.

Participants were given a budget and asked to spread their money over two accounts. Both paid 22 percent interest. One was a “freedom” account. People could withdraw and spend money whenever they liked. The other was a “commitment” account. Here people were allowed to set their own withdrawal date. In one arm of the study, the early withdrawal penalty was 10 percent; in a second arm it was 20 percent; and in the third arm of the study no withdrawals were allowed before the early withdrawal date. People in the “no withdrawal” arm put a much larger percentage of their money into the commitment account than those who faced a 10 or 20 percent penalty for early withdrawal.

As it happens, 10 percent is precisely the penalty savers are charged for withdrawing money from a standard 401(k) retirement plan. With this in mind, Laibson left the audience with a question that gave a nod to the midterm elections and opposition to government social welfare efforts.

“If people want commitment — and they seem to want it — what kind of system should we build?” he asked. “What would the world look like if people could build their own commitments? These are the questions that we should be answering if we’re not comfortable with the heavy-handed paternalism that Americans seem to reject.”