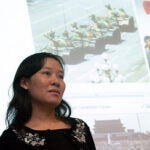 Panel says the threat is real, and the ways to battle it imperfect

Feeling relaxed today? Well, consider a few facts recounted during a Harvard panel discussion: There are 23,000 nuclear weapons in the world, and enough enriched uranium and plutonium to make 100,000 more. Officially, nine countries have such weapons, but 30 possess the basic ingredients to make at least a crude bomb.

And size is not a limiting factor. The enriched uranium needed to detonate such a weapon would fit into a six-pack of beer, said Graham Allison, one of a coterie of analysts at the Harvard Kennedy School (HKS) who specialize in security and nuclear terrorism. Shielded in a lead container, he said, such a weapon could be smuggled into the United States “in a bale of marijuana.”

Allison, who directs the Belfer Center for Science and International Affairs, moderated a panel on the future of nuclear weapons on Wednesday (Dec. 1) at the John F. Kennedy Jr. Forum, a venue sponsored by the Institute of Politics.

The gist: There is real reason to fear because, given that there are thousands of bombs, global terrorists could exploit a security gap. “All we’re talking about is just one,” said Rolf Mowatt-Larssen, a senior fellow at the Belfer Center who worked for the Central Intelligence Agency for 23 years. “We’ve got to be right all the time [about security]. The terrorists only have to be right once for us to fail.”

There also is reason to hope. No nukes have been used for aggression since 1945, and in the last 10 years nuclear stockpiles have been made more secure.

“Don’t give up hope, and get involved,” said panelist Matthew Bunn, an HKS associate professor of public policy and co-principal investigator for the School’s Project on Managing the Atom. He said that getting involved means studying the issues and contacting lawmakers in Congress — even joining a group that advocates dismantling all nuclear weapons.

One such group is Global Zero, an international movement launched two years to stop the spread of nukes, secure bomb-ready materials, and ultimately eliminate all nuclear weapons. “It’s not going to happen next Tuesday,” said panelist and former CIA covert operative Valerie Plame Wilson, who supports Global Zero. “But we have to start somewhere. … This is the issue for the 21st century.”

During the Clinton administration, Allison worked on reducing the former Soviet Union’s nuclear arsenal. He also is the author of “Nuclear Terrorism: The Ultimate Preventable Catastrophe” (2004), in which he outlines the “Three Nos”: no loose nuclear weapons, no new ones, and no new nuclear-weapons states.

Just say “no” or “none” was the panel’s ultimate message, but there is a lot of work to do on the issue, and a lot to worry about.

Fear was the main message of “Countdown to Zero,” a 90-minute documentary released this year that warns of the likely use of nuclear weapons in a terror-shaken world. Allison and the three HKS panelists all appear in the film, which was made by Participant Media and producer Lawrence Bender, creators of the Al Gore climate-change documentary “An Inconvenient Truth.”

As a warm-up to the panel, the audience watched 12 minutes of the film, including archival footage from what could be prophetic acts of terror: in Madrid, London, Mumbai, Nairobi, Buenos Aires, Oklahoma City, and New York on Sept. 11, 2001.

But terrorist leader Osama bin Laden has vowed “to kill 4 million Americans,” said Graham in the film. “You’re not going to get to kill 4 million people by hijacking airplanes and crashing them into buildings.”

On screen, Mowatt-Larssen said there are three ways for terrorists to get a nuke: steal it, buy it, or build it —and the last option “startled” him.  He also said that any nuclear materials captured on the black market so far were “caught by luck.”

In the film, Bunn recounted one incident of nuclear-materials theft in Russia, then quoted a prosecutor as saying: “Potatoes were guarded better.”

Wilson was a CIA officer whose job was to track the world’s black market in nuclear materials. But she finally realized that she was just “delaying the inevitable,” telling the audience that the only real solution was to be a public advocate “for the complete elimination of nuclear weapons.”

The sense of the “inevitable” is still there, said Allison, who fears most of all that nuclear materials will be smuggled out of Pakistan, despite improved security there. And the threat of catastrophic attack goes beyond nukes. He quoted a recent report that said by 2013, chances are “better than half” that terrorists will deploy a large-scale nuclear or chemical-biological weapon somewhere in the world.

Be ready, said Mowatt-Larssen. “We’re going to face that … one day,” he said of a catastrophic attack on U.S. soil, but how we handle it afterward “will challenge our very way of life.” Worst of all, said Mowatt-Larssen, would be an overreaction — a reckless military strike, or an abrogation of governance and civil liberties.

“We have to live with the prospect” of such an attack, he said, and start talking about the aftermath now “so we survive it, maturely.”

Even just one “dirty bomb,” an explosive that disperses radioactive material over a wide area, could “evaporate” American civil rights, said Wilson. A dirty bomb is more a “weapon of mass disruption” than destruction, said Bunn, though the costs could still be high, and the materials to make one are available in any Western hospital.

Even making a crude conventional nuclear weapon would not require a well funded or lengthy Manhattan Project, he said — just enough enriched material to slam together, creating fission, and a nuclear chain reaction. Such a weapon, though “unreliable and unsafe,” said Bunn, “might fit in the back of a truck.”

Eliminating nuclear weapons would require tools that are not yet available, said Mowatt-Larssen, including a “global intelligence capacity,” along with the willingness of nations to share information, and better technology for detecting smuggled nuclear materials.

Currently, said Wilson, detectors have to get within inches of hidden enriched fissionable materials that are shielded by lead.

Maybe the answer to nuclear disarmament is just to get close to the goal, said Bunn. He offered one proposed scenario among many: Reduce each nation’s stockpile of nuclear weapons to 50, all of them disassembled and guarded by U.N. overseers. “We’ve got to think harder,” said Bunn, “about what we think of as zero.”