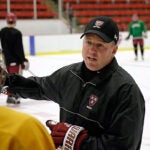 The Harvard Foundation on Dec. 16 proudly unveiled the portrait of Caleb Cheeshahteaumuck, a member of the Wampanoag tribe, and the first Native American to graduate from Harvard College, in 1665. The portrait, painted by artist Stephen Coit ’71, resides in Annenberg Hall.

The unveiling is part of the Harvard Foundation Portraiture Project, a diversity initiative to recognize Harvard faculty, administrators, and others who have served the University for many years with distinction. The addition of Cheeshahteaumuck’s portrait is especially significant because it speaks to Harvard’s early establishment of the Harvard Indian College, and to its formal charter in 1650 for “provisions that may conduce to the education of English & Indian youth of this Country in knowledge and godliness.”

“This is a proud moment in the history of Harvard University, and its relations with Native Americans,” said S. Allen Counter, director of the Harvard Foundation, and creator of the Harvard Foundation Portraiture Project. “I have looked forward to this unveiling since proposing the portrait of Caleb Cheeshahteaumuck to our committee some years ago. The image has been well-researched, and created in consultation with members of the Wampanoag tribe. I am happy that our Native American students are pleased with the portrait, and have requested that it be hung in Annenberg Hall so that future classes of Harvard students will be made aware of the Native American presence at Harvard since its creation.”

The Rev. Peter J. Gomes, Plummer Professor of Christian Morals and Pusey Minister in the Memorial Church, and chairman of the project, said, “Our committee is pleased to represent Harvard’s Native American roots in this splendid portrait of Caleb Cheeshahteaumuck, and to place it in Annenberg Hall for all to witness.”