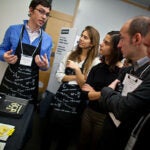 At last, the edible science fair

Michael P. Burke has been appointed the new registrar for the Faculty of Arts and Sciences (FAS), effective Jan. 31.

Burke is currently director of admissions and registrar at the Harvard Kennedy School (HKS). Among his many accomplishments at HKS are implementing a new student information system and leading the transition from a paper-based application and registration system to a self-service, online system, thus enhancing student services, lowering costs, and increasing efficiency.

Burke received a master’s of education in higher education administration from Harvard and a B.A. in political science from Syracuse University. He also served as a Peace Corps volunteer in Nkayi, Zimbabwe, where he worked with rural subsistence farmers, and has continued his volunteer efforts by establishing a monthly HKS volunteer program at Rosie’s Place, a women’s shelter in Boston.

In his new role, he will lead and oversee the Office of the Registrar for FAS, which serves both Harvard College and the Graduate School of Arts and Sciences. He will work closely with faculty, staff, and students across and beyond FAS.