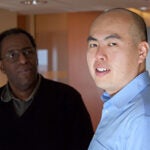 There’s the website to help you figure out why you don’t feel so good. Then there’s the site that offers a new card game — with electronic cards, of course. There’s one that sells a grandmother’s handmade greeting cards. And there are so many more.

Computer programming innovation — in both quality and quantity — was on display Friday (Dec. 10) at the Northwest Science Building in the CS 50 fair, an annual celebration of a semester’s worth of programming toil by hundreds of Harvard students, most of whom had taken their first foray into computer programming.

CS 50, Introduction to Computer Science I, is a fast-growing lecture course taught by Lecturer on Computer Science David Malan. The class, taught long enough at Harvard for Malan himself to have taken it as an undergraduate in 1996, has drawn larger crowds in recent years, with enrollment rising to 500 this year from 300 last year. When the Extension School twin of the class, E-52, is added in, Malan said roughly 580 students took the course this fall.

Malan credited technological trends in society — as evidenced by the popularity of Facebook and Google — along with increased efforts by the department to reach out to students less comfortable with technology for the increased interest in the course. Either way, so many students enrolled that they had to display their projects at the fair in three shifts.

Though the course has been around for more than two decades, the CS 50 fair itself is just in its third year. Projects were displayed on laptop computers arranged on rows of long, black-draped tables in the Northwest Science Building’s basement exhibit hall. An enthusiastic crowd filled the hall, chatting with students about their projects and munching on free candy, popcorn, and cupcakes. The conversational buzz was backed by a pulsing bass beat emitted by large speakers. White, blue, and black balloons were tethered to tables and railings.

Megan Blewett, a senior chemistry concentrator from Currier House, developed a searchable medical database, called Voxhealth, where people suffering from certain symptoms can find information about illnesses that fit those symptoms. The site relies on free data from the U.S. Centers for Disease Control and Prevention and contains information on 12,000 illnesses. Blewett is so excited about the project that she wants to continue working on it over the holiday break, even though the class will end before she heads home.

“It’s kind of addictive, working on this,” Blewett said. “I thoroughly enjoyed it.”

Cameron Ray Anaya, a senior applied-math concentrator from Leverett House, said he liked the class for its real world application. Anaya’s grandmother, who lives in Idaho, draws greeting cards, so Anaya created a website to sell them to the public. The site has a secure payment system, via PayPal. Anaya, like Blewett, wants to keep working on it in the weeks ahead to add functionality.

The CS 50 experience seems to inspire enthusiasm in students. Malan himself credits it with changing him from a government concentrator to a computer science concentrator when he was an undergraduate.

“I was on a very different track,” Malan said. “In CS 50, I discovered homework could actually be fun. After CS 50, I knew that was what I wanted to study.”

He completed his doctorate at Harvard in 2007 and has been teaching the class since shortly after that, taking over from Michael Smith, who was named dean of the Faculty of Arts and Sciences that year.

“I think it’s really gratifying what you can do by immersing yourself in a new world and realizing what’s possible,” Malan said. “This is one of those courses at any university that you exit feeling smarter. You feel, wow, you came a huge distance.”