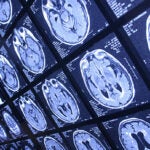 For Roy Ahn, life is a joy — and sometimes a struggle.

The father of 1-year-old Charlie is blessed with a blossoming research career at the Division of Global Health and Human Rights in Massachusetts General Hospital’s (MGH) Department of Emergency Medicine. Some people might even say that Ahn has it all.

Ahn’s not complaining, but he’s in the same boat as many young Harvard researchers, handling the duties of a young family even as the pressures to perform professionally are soaring.

“We’re just constantly juggling our schedule and finances to make child care in Boston work,” Ahn said. “It’s expensive. And logistically, we each have to do our part to get him there and pick him up.”

When he’s not shuttling Charlie to and from day care or playing tag-team parent with his wife, Amy, a Brookline teacher, Ahn is working on several projects at MGH, including work that seeks to understand how global health activities of nonprofit hospitals fit into their conception of providing community benefits, something the hospitals are required to do to retain their nonprofit status.

Ingrid Katz, an instructor in medicine at Harvard Medical School (HMS) and Harvard-affiliated Brigham and Women’s Hospital, feels Ahn’s pain. Katz is juggling life as mother of 3-year-old Tomás, along with clinical duties, and a multipronged research effort based in South Africa that takes her away from home for several weeks four times a year.

To the rescue of Ahn and Katz, and to others such as instructor in pediatrics Lynda Vrooman and Instructor in Medicine Bindu Chamarthi, comes the Eleanor and Miles Shore 50th Anniversary Fellowship Program for Scholars in Medicine. The program is aimed at junior researchers in the squeeze years when young families and blossoming research careers both demand attention. Young physicians and scientists during these years often have to teach, conduct research, treat patients, publish research articles, write grant applications, and care for their little children.

The program, established in 1996 to honor the 50th anniversary of the admission of women to HMS, provides fellows with between $25,000 and $50,000 for one or two years, with the aim that the money be used to buy protected time to pursue a key activity, whether finishing a grant proposal, completing important research, or concluding a manuscript. The money can be used, for example, to hire lab help that a fellow would otherwise not be able to afford. The program has 80 fellows this year.

Katz said that 75 to 80 percent of her research is based in South Africa, and if it weren’t for her young family, she’d probably be based there herself. Still, Katz said that family life is important to her. Her son was born in 2007 to her and her partner, Alexi, a physician at the Dana-Farber Cancer Institute. Adding to the challenge is the fact that their condominium burned down two years ago during Thanksgiving week. They lost everything.

“We were learning to rebuild our lives while [completing our] training and becoming young parents,” said Katz, who also sees patients at the Brigham. “It taught us a great deal about how great and kind people are, and what to be grateful for.”

Katz’s research includes several projects being conducted in collaboration with the Perinatal HIV Research Unit at Chris Hani Baragwanath Hospital in Soweto, South Africa. The Shore Fellowship is aimed at boosting her work on human papillomavirus (HPV) vaccine research. Katz is studying uptake and adherence to the multistep process of administering the vaccine. HPV is a common sexually transmitted virus that is a major cause of cervical cancer.

“Few fellowships out there recognize the importance of this time in our careers,” Katz said. “It is a tremendous gift.”

For Chamarthi, the Shore Fellowship comes at a crucial point as she builds a research career after six years in practice. Chamarthi, an endocrinologist at Brigham and Women’s as well as an HMS instructor in medicine, worked as a primary care physician at Harvard Vanguard. She resumed her research career with a fellowship in endocrinology, completed last year, and is now an associate physician in the Division of Endocrinology, Diabetes, and Hypertension at Brigham and Women’s Hospital.

Her research and clinical interest is in cardiovascular endocrinology, and she is working on research projects focusing on the hormonal and genetic mechanisms that increase the risk of high blood pressure and cardiovascular disease. Chamarthi said the Shore Fellowship is providing critical support for her at a time when she’s still establishing herself as a researcher.

“It helps during the transition period when we’re trying to get our own funding,” Chamarthi said.

For Vrooman, an instructor in pediatrics at the Dana-Farber Cancer Institute and Children’s Hospital Boston, the fellowship is helping her to track the lasting and sometimes severe effects of cancer treatment in children. In addition to her clinical work, Vrooman, who serves as the associate medical director of the Perini Clinic for Childhood Cancer Survivors, is conducting research into the effects on a child’s bones of the treatment for the most common type of childhood leukemia, acute lymphoblastic leukemia. In some cases, Vrooman said, children can develop breaks in the bone or serious joint issues during or soon after treatment ends.

Researchers suspect that the bone problems stem from steroids used in treatment, as well as other factors. She is looking at past cases of patients who developed a serious bone complication, known as osteonecrosis, in order to better understand the long-term consequences of this condition. She is also developing a study of current and future patients to monitor their body’s vitamin D levels. Vitamin D is a known factor in bone health.

Vrooman is the mother of a young child, 2-year-old Lillian, who required intensive parental attention early in life because she was born prematurely, weighing just a pound and a half.

“She’s done very well. It was a very intense experience as a new parent,” Vrooman said. “She’s almost 3 now, running and walking and talking. She’s on the small side, but she doesn’t know it.”