Keeping HIV out of the cradle 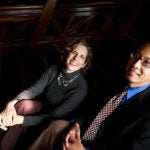 For decades, HIV has stalked not just sexually active adults around the world, but also babies living in the world’s poorest countries, hanging a virtual death sentence over nearly half of those born to HIV-positive mothers.

That fact has been slowly changing, as scientists engaged in the struggle against HIV and AIDS better understand the routes through which the virus crosses from mother to baby. Scientists have shown that giving the mother antiretroviral drugs will reduce a baby’s chances of contracting HIV during the long months of gestation and the brief trauma of birth.

The Harvard School of Public Health AIDS Initiative (HAI) recently gave health workers a major tool to keep HIV from the world’s most vulnerable, with a study that shows that multidrug therapy nearly eliminates mother-to-child transmission during breast-feeding.

The study, published in The New England Journal of Medicine in June, was conducted between 2006 and 2008 among 730 HIV-infected mothers in the African nation of Botswana, where HAI has a long-term partnership with the Ministry of Health. The study compared three drug combinations in an effort to understand which would best suppress the virus and its transmission during breast-feeding. The results showed that each of the treatments was effective and cut HIV transmission to less than 1 percent.

Multidrug therapy has revolutionized AIDS treatment since its advent in the mid-1990s. It dramatically reduced AIDS death rates across the industrialized world, transforming the disease in those countries from a death sentence to a severe but manageable ailment.

But in poorer countries, the AIDS epidemic still rages. In 2008 alone, 2 million people died of AIDS and 2.7 million were newly infected. Though major efforts to improve access to antiretroviral drugs have had some success in recent years, the drugs are reaching just over a third of those who need them in low- and middle-income countries. The medicine gets to even fewer children, just 28 percent, according to the World Health Organization (WHO).

Without intervention, a breast-feeding infant with an HIV-infected mother has up to a 40 percent chance of contracting the virus, according to one author of the study. About 400,000 infants are infected annually, according to WHO statistics. The virus enters a baby through three major avenues: gestation, birth, and breast-feeding. Many babies infected with HIV die within a few years, and those who don’t face a lifetime of taking drugs to control the disease.

Although research has shown that multidrug therapy can be effective in preventing transmission in both gestation and during birth, how to best safeguard the baby after birth has been controversial.

Public health workers in developing countries have long felt that, absent HIV, breast-feeding was far preferable to bottle feeding because of the risk of disease associated with unsanitary conditions and dirty water used in making baby formula. In addition, breast milk bolsters a baby’s immune system during the first months of life.

Early studies, however, showed that bottle feeding was the safest way to keep babies of HIV-positive mothers virus-free, so when the issue was first addressed in developing countries, early guidelines recommended using bottles. The problem was that those studies were conducted in industrialized nations and didn’t take into account poor sanitation and the high disease burden commonly found in less-developed countries. The result was that bottle-fed babies in poor countries had about the same risk of dying of a diarrheal or respiratory disease as of contracting HIV through breast-feeding, according to the study’s lead author, Roger Shapiro, an associate professor at the Harvard School of Public Health (HSPH) and Harvard Medical School (HMS).

HAI Chairman Max Essex, the Lasker Professor of Health Sciences at HSPH and the study’s senior author, said the results were particularly impressive in the sickest group, whose immune systems were under the fiercest attack by the virus and so are most likely to transmit it to their babies. That group saw only one baby get infected, before birth, and no infections during breast-feeding.

“That rate is way lower than any rate anyone’s ever seen in the world, even without breast-feeding,” Essex said. “I don’t think it should be controversial anymore. I think it’s clear you can breast-feed safely.”

The study has already had real-world effects. It has prompted the government of Botswana to devise a program — still being finalized — to offer antiretroviral drugs to breast-feeding mothers, Shapiro said. In addition, the WHO has cited a combination of “significant programmatic experience and research evidence” in issuing new guidelines. Those recognize that breast-feeding while taking antiretroviral drugs can improve an infant’s chance of both surviving and remaining HIV-negative.

In addition, Essex and Shapiro said, the study bolsters the argument that HIV-positive mothers with infants should be a top priority for the scarce antiretroviral drugs. From an economic standpoint alone, Essex said, the study shows that giving the drugs to the mothers can prevent HIV infection of an infant, saving the child from a lifetime of antiretroviral drug use.

“It definitely means they should be top priority,” Essex said. “Anybody who can do math can immediately tell that the cost savings are far greater if you treat the mothers first and avoid treating infants later.”