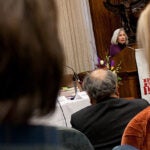 The ripples of Brown v. Board

“I went to this interview too quickly,” New York Times reporter David Rohde admitted to a Harvard Kennedy School audience on Tuesday (Dec. 7), about his 2008 meeting with a Taliban commander in Afghanistan.

His haste led to seven months and 10 days of captivity.

Associates of a top Taliban commander kidnapped Rohde, an author and Pulitzer prize-winning reporter, along with two Afghan colleagues, as Rohde gathered information for a book. Their scheduled interview was a trap.

Speaking at the Joan Shorenstein Center on the Press, Politics and Public Policy, where he was once a fellow, Rohde was accompanied by his wife, Kristen Mulvihill. Together, they authored the 2010 book “A Rope and a Prayer: A Kidnapping from Two Sides,” which examines the experience from his and her perspective. They married just two months before the kidnapping.

Soon after he was kidnapped, Rohde was taken to Pakistan. He described his captors’ network as well-organized, and he recalled that as they moved across the border all the government checkpoints had been abandoned by Pakistani security forces and were manned by Taliban gunmen.

In a testament to their comfort level, Rohde’s kidnappers boldly kept him not far from a Pakistan military base, used a radio network for communications, and even allowed him to make an easily traceable call to his wife. Later Rohde said he noticed “seamless cooperation” between the Pakistani and Afghanistan Taliban forces when he was moved farther into the country.

Though he was not beaten or tortured, Rohde discussed being exposed to “tremendous cultural differences” while in captivity. His effort to convince his kidnappers how much he missed his wife with a tearful plea, for example, wasn’t in retrospect the wisest tact.

“To the Taliban, if you are crying that means that you are somehow guilty, because a Pashtun never wants to show that they are weak; it’s very shameful to show weakness. So that actually made them more suspicious. In a culture that is deeply religious, the notion “that you might want to go back and see your family,” Rohde said, “is a sign that you are too caught up in earthly pleasures.”

After the initial shock of learning that her husband had been kidnapped, Mulvihill, a new photography editor at Cosmopolitan Magazine in New York City, said she took each moment as it came and “tried to learn as much as I could.”

She ultimately chose to hire a private security firm based in Afghanistan to aid the search for her husband. The FBI offered assistance and training on how to take calls from the kidnappers. The U.S. military knew he was being held in a 20-square-mile area in Pakistan but could not provide further details.

“We hired the contractors because there was a gap,” said Mulvihill, adding that “in the end [the FBI] really couldn’t advise us closely.”

Eventually, Rohde and one of his colleagues were able to escape while their captors slept. They lowered themselves down a wall and headed for the nearby Pakistan military base, all the while “terrified,” said Rohde, “that an even more militant group would get us.”

The couple said they hoped their book will serve as an inspiration for others struggling through difficult times.

“In writing the book,” said Mulvihill, “we hope it resonates with anyone going through a situation where they are dealing with uncertainty.”