In search of Captain Nemo 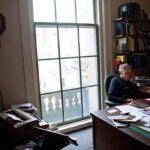 A senior decides to chart his own course, like his literary idol

I have always loved stories.

Sometimes, I find stories that my life absorbs. The ancient Sanskrit epic “Mahabharata,” detailing the deeds of valorous heroes and austere sages, is one such tale. Ayn Rand’s “Atlas Shrugged,” with its portrayal of the disciplined steel magnate Hank Rearden, is another.

One story in particular stands out: Jules Verne’s “20,000 Leagues Under the Sea.” Ever since I first read it as a child, I have wanted to be Captain Nemo — a solitary inventor, a man of powerful principles and emotions who roams the oceans in a submarine of his own design. It is motivation from inspiring stories like these that has created my Harvard experience, and that same motivation informs my aims for the future.

I applied to Harvard because it was the one institution that harbored the most people who had influenced my thought — an intellectually diverse list that included Joseph Schumpeter, W.E.B. Du Bois, Tim O’Reilly, E.O. Wilson, Stephen Jay Gould, Robert Oppenheimer, William James, and Bill Gates, among others. The moment I read the acceptance email, I felt a wave of excitement that my story, in a small but meaningful way, touched each of theirs.

In the first few weeks of my freshman year, I drowned in Harvard’s quiet traditions — the established career paths, the rigorous competition for graduate schools and fellowships, the resume-padding extracurriculars. Disenchanted, I made the naive decision to not get a job, go to graduate school, travel on a fellowship, or do anything similarly structured straight out of college, so that I can dedicate my time here entirely to exploration.

That dramatic declaration is not meant to be a normative statement about how Harvard needs to change. I love Harvard as it is. It is beautiful how many great opportunities the University has continued to provide for its students over the centuries. But despite how wonderful those opportunities are, some discontented part of me chose to reject them, on the simple basis that I did not want a Harvard experience that was scripted for me. I wanted to write my own story.

Since then, I have inundated my brain and schedule with learning — doing well in some classes, barely passing others, pursuing disconnected interests like Sanskrit, political philosophy, or probability theory, browsing the libraries regularly to satisfy my curiosity, concentrating in computer science, regularly visiting the MicroCenter down the road to keep up with technology, and, most importantly, talking to as many people here as possible, in awe of their brilliance, drive, and kindness. I have made mistakes, but I regret nothing, because of how neat it all is on the pages of history.

Now, nearing graduation, the question of what to do after college looms. In keeping with my naive decision freshman year, I have chosen to start a company. Quite literally, that is all I have done — I am the owner of a corporation that has yet to have a product, let alone a sound plan for making money. Friends and family have criticized me for this, saying that it makes more sense to build a product first and see if it catches on, or at least to get a job and work on this part-time, rather than discard other opportunities for one that may not even exist. They are probably right, but predictability never made for an exciting story. (Besides, I can make it all work during winter break.)

I feel like Captain Nemo, building a corporation as my submarine, wanting to explore the world in it. I have been saving money from various jobs for the past three years as fuel for this purpose. I do not know if I will succeed or fail. But whatever happens, I intend to live an interesting story, for the satisfaction of none other than myself.