Ice sheet in peril? Gravity to the rescue 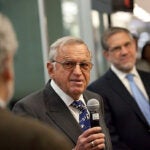 Scientists have long been concerned that the melting of the massive West Antarctic Ice Sheet could become a self-reinforcing process, with the released water raising sea levels, leading to more melting, and so on.

Their concern stems from the fact that much of the land on which the ice rests is actually below sea level, forming a bowl sealed from the ocean by the immense weight of the ice above it. Should seawater infiltrate that bowl, scientists are worried it could float the ice at its edge, starting a runaway collapse that could raise the global sea level as much as 16 feet.

Now, however, Harvard researchers have a rare bit of what passes for good news on the global warming front: If the West Antarctic ice sheet melts, it will have the seemingly contradictory effect of lowering sea levels nearby, actually stabilizing the sheet.

The key ingredient in this surprising conclusion is the familiar force of gravity.

We typically think of gravity as a cosmic force, exerted by enormous celestial bodies like the Earth and the sun that act on other large bodies across long distances, or on small bodies, like humans.

But physics teaches that a gravitational pull is exerted by every bit of matter on every other bit of matter. Other than the grounding effect of Earth’s gravity, though, that is negligible for most aspects of our day-to-day lives. But graduate student Natalya Gomez and her adviser, Professor of Geophysics Jerry Mitrovica, have been working hard in recent years to understand the gravitational effects of the enormous areas that make up the ice sheets.

Gomez’s research makes use of the fact that the sheets are so vast that they are exerting a significant gravitational pull on the ocean. When the ice sheets melt, the expected sea level rise from all that meltwater entering the oceans would be counterbalanced by the relaxation of the sea level near the ice sheet due to a decreased pull from the gravity of the remaining ice.

The effect would be not just noticeable, but massive. In that earlier work, Gomez showed that if all of the West Antarctic sheet melted, it could actually lower sea level near the ice by as much as 300 feet.

Her most recent work, conducted with Mitrovica, Assistant Professor of Earth and Planetary Sciences Peter Huybers, and Professor Peter Clark from Oregon State University, seeks to understand the feedback the falling sea levels near the ice sheet would have on the ice itself. Their conclusion is a hopeful one: that the dropping sea levels would actually work as a stabilizing force on the sheet.

Though the research can be explained in the context of the West Antarctic sheet, the work that Gomez detailed in a November article in the journal Nature Geoscience provides a more general model of the interaction between sea level and an ice sheet sitting on a depressed, bowl-shaped land area.

The model, Mitrovica and Gomez said, is intentionally simplified to highlight the effects of gravity. In reality, there are many interacting forces affecting the sheets’ behavior, including the supporting effect of nearby floating ice shelves, the girding effect of mountain ranges and land contours, and even the nature of the interface between the ice and the ground itself, smooth or rough.

Mitrovica said the work has already attracted the attention of several of the world’s top ice-sheet modelers, whose computer simulations are key components of findings of the Intergovernmental Panel on Climate Change (IPCC). The IPCC’s periodic pronouncements on global warming attract enormous attention from the public and from governments considering actions to counteract climate change.

Despite the potentially massive effect of gravity on sea levels near the ice sheets, none of the sophisticated computer simulations of ice-sheet behavior today include gravity as a factor to be considered, Mitrovica said. That appears likely to change, he said, as the modelers hustle to link Gomez’s simulations of sea level change to their own behavioral models.

The gravity-sea level interaction “is not going to halt the collapse of the ice sheet, but it’s going to slow the rate of collapse,” Gomez said.