How we get hooked 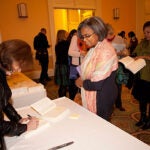 Addictive drugs are like a cool spring in the desert or a juicy apple in famine, using pathways in our brains designed to provide life-saving learning about basic needs such as food, safety, and sex, Harvard Provost Steven Hyman said Tuesday evening (Dec. 7) in a talk at the Harvard Allston Education Portal.

Hyman, the latest speaker in a lecture series designed to open Harvard’s academic workings to neighbors in nearby communities, conjured up early humanity in explaining what makes addictive drugs so irresistible. These drugs hook us by mimicking brain chemicals such as dopamine that evolved to keep us alive in an uncertain and primitive world, where a key memory like the location of a productive hunting ground or a water source could mean the difference between life and death.

The brain was designed to cement such memories and lift them from recollections of humdrum daily activities by creating a pleasurable association, through the release of neurotransmitters such as dopamine. The hook with addictive drugs, however, is that they not only mimic these chemicals, but multiply their effects, causing cravings that push us to seek more and increasing the danger of relapse for those who’ve quit.

Similar processes are also at work with negative memories, where chemical cascades in the brain signal danger.

Hyman, a professor of neurobiology as well as provost, spoke to a crowd of about 60, some of whom peppered him with questions after the talk. The Harvard Allston Education Portal opened in 2008 as a resource to the community. Several programs are run through the portal, including mentoring and community lectures.

Bruce Houghton, a member of the Harvard Allston Task Force, said he thought that community presentations such as Hyman’s were “absolutely terrific.” Harvard has always been an excellent educational institution but hasn’t always given neighbors access to that excellence, Houghton said. These programs remedy that.

“This is fantastic,” he said.

“I thought it was wonderful. He has quite the ability to say many things and weave them into one thread,” Pasternak said.

Hyman, who led the National Institute of Mental Health from 1996 to 2001, mixed down-to-earth examples (the pleasurable smell of baking bread), with practical cases (a physician addicted to tobacco even though he knows better), with more technical descriptions of how brain chemicals work to highlight why addiction is so difficult for those caught in its web. Once hooked, taking drugs or alcohol becomes an automatic behavior, Hyman said, triggered by certain cues, such as stress, smell, or even seeing a bar.

“We need better treatment; this really destroys lives,” Hyman said. “Not everyone who tries these drugs gets addicted, but you don’t know who you are ahead of time.”