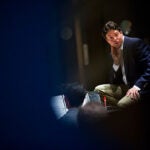 When Annika Brink, M.P.P. ’11, arrived at the Harvard Kennedy School (HKS) last fall, she saw the need for a coalition of students committed to hands-on environmental action. Brink is now a co-leader of Kennedy School Climate Action (KSCA), a group that she helped to found that works with faculty and staff to institute and promote green initiatives on campus.

During the past year, members of KSCA have hosted a number of events, including a bike day to encourage green commuting (complete with tire pumps and free mechanic services from Eastern Mountain Sports) and a zero waste “Quorum Call,” the weekly social event at HKS, featuring an all-local menu and compostable plates, cups, and flatware.

Last February, KSCA collaborated with Rob Gogan, supervisor of Facilities Maintenance Operations Recycling and Solid Waste Removal, on a student-run waste audit, the first of its kind at HKS.

“We dressed up like we were handling biohazardous material, with masks, gloves, caps, and surgical gowns, and we sorted through garbage,” said Brink. “We pulled out things that could have been recycled, reused, or composted, and from that we came up with a breakdown of how well HKS was doing with recycling.”

Overall, they found that 40 percent of the 130 pounds of trash they sorted could have been reused or recycled. An additional 25 percent of the trash — including paper towels, fruit peels, tea bags, and even a bouquet of roses — could have been composted. They attribute some of the confusion about recyclables to the recent switch from multiple-stream to single-stream recycling. In response, KSCA is working with HKS Facilities Management and the staff-led Sustainability Initiative (HKSSI, formerly known as the HKS Green Team) to improve the recycling system and develop additional recycling education.

“We are working on instituting a program of clearer signage,” explained Jeffrey Martin, director of the Office of Facilities Management at HKS. “We purchased new recycling canisters this summer, and we plan to have display tables during peak times in the café that explain what is and isn’t recyclable.”

KSCA plans to track the School’s progress by conducting another waste audit this year. All HKS buildings have gone through ASHRAE (American Society of Heating, Refrigerating, and Air-Conditioning Engineers) level 2 energy audits. This summer, Facilities Management implemented a number of recommended conservation measures, including insulating the roof of the Belfer building and installing film on all windows of the south-facing side of the Littauer building, to reduce heat impact. In 2008, the University set a goal to reduce greenhouse gas emissions 30 percent by 2016 (from 2006 levels, including growth). To date, Martin estimates that HKS has achieved 16 percent of its 30 percent reduction goal.

Cooperation between student and staff groups is an essential part of greening efforts at HKS. Last December, the student government created a green representative. Graham VanderZanden, M.P.P. ’11, a founding member of KSCA, was appointed the first representative.

“The job of the green representative is to advocate for environmental issues on campus and to be knowledgeable about different initiatives,” he said. “It’s important to connect organizations like KSCA to HKSSI, and to connect those groups with important administrative departments, like Facilities.”

KSCA, HKSSI, and HKS Facilities Management worked together to institute composting in kitchen and catering operations, and also helped five administrative offices achieve Leaf 1 certification through the Office for Sustainability’s Green Office Program. Using a series of four checklists, offices can progressively institute green measures that cut energy use and reduce waste, such as encouraging use of reusable mugs, purchasing materials made with recycled content, and implementing energy-saving power management settings for computers and other electronics.

“Our goal is to get all the HKS administrative offices Leaf 1-certified by the end of the year,” said Vidya Sivan, communications coordinator and co-chair of HKSSI. “We will also continue to host ‘freecycles.’ Instead of throwing away the things you don’t need, like unwanted office supplies, you can give them away. It’s a good way to prevent waste.”

Students and staff also collaborated on the installation of more than 200 smart power strips in HKS offices at 124 Mt. Auburn St. (University Place) last spring. This year they plan to finish the project and hope to begin installing energy-saving strips on the main campus.

Though most major School events are zero waste (including the holiday party and student and staff picnics), members of KSCA hope to write a zero waste plan for all of HKS.

“Our general philosophy is that it should be really easy to be green, and it should also be fun,” said Brink. “Encouraging people to be green should never be a case of nagging. It should be a changing of norms. Let’s ask, ‘Can we make the Kennedy School zero waste? And how soon could we make that happen?’”