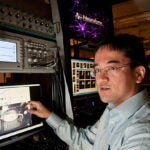 The must-have gift for young female chimpanzees this holiday season might be part of the Christmas tree, not under it.

That’s the finding of scientists at Harvard University and Bates College, who say female chimpanzees appear to treat sticks as dolls, carrying them around until they have offspring of their own. Young males engage in such behavior much less frequently.

The new work by Sonya M. Kahlenberg and Richard W. Wrangham, described in the journal Current Biology and released Monday (Dec. 20), provides the first suggestive evidence of a wild nonhuman species playing with rudimentary dolls, as well as the first known sex difference in a wild animal’s choice of playthings.

The two researchers say their work adds to a growing body of evidence that human children are probably born with their own ideas of how they want to behave, rather than simply mirroring other girls who play with dolls or boys who play with trucks. Doll play among humans could have its origins in object-carrying by earlier apes, the researchers say, suggesting that toy selection is probably not due entirely to socialization.

“In humans, there are robust sex differences in children’s toy play, and these are remarkably similar across cultures,” said Kahlenberg, a lecturer in biology at Bates who conducted the research as a postdoctoral researcher in Wrangham’s group at Harvard. “While socialization by elders and peers has been the primary explanation, our work suggests that biology may also have an important role to play in activity preferences.”

In 14 years of data on chimpanzee behavior at the Kibale National Park in Uganda, Kahlenberg and Wrangham counted more than 100 examples of stick carrying. In many cases, young females weren’t using the sticks for foraging or fighting, as adults sometimes do, or for any other discernible purpose.

Some young chimpanzees carried sticks into their nests to sleep with them, and on one occasion built a separate nest for the stick. The researchers even witnessed the animals playing a version of the “airplane game,” lying on their backs with their “offspring” balanced across their upraised hands.

“We have seen juveniles occasionally carrying sticks for many years, and because they sometimes treated them rather like dolls, we wanted to know if in general this behavior tended to represent something like playing with dolls,” said Wrangham, the Ruth Moore Professor of Biological Anthropology at Harvard. “If the doll hypothesis was right, we thought that females should carry sticks more than males do, and that the chimpanzees should stop carrying sticks when they had their first offspring. We have now watched enough young chimpanzees to test both points.”

Kahlenberg and Wrangham’s observations included a few adult females that carried sticks, but only before they became mothers. Their finding links juvenile play to adult behavior, since female chimpanzees, not males, carry infants more than 99 percent of the time.

“Obviously, in humans there is a huge role for peers, parents, and others to influence a child’s preferences for different kinds of toys, and the same may well be true of chimpanzees,” Wrangham said. “One of the things that makes our finding fascinating is that there is little evidence of anything comparable in other chimpanzee communities, which raises the possibility that the chimpanzees are copying a local behavioral tradition. So this may be a lovely case of biological and social influences being intertwined.”