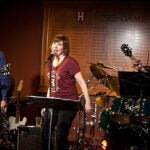 Administrator by day, singer by night

Paul Farmer, an anthropologist and physician whose research has helped to revolutionize the strategies for treating infectious disease in some of the poorest corners of the world, has been named a University Professor, Harvard’s highest distinction for a faculty member.

“Paul Farmer is best known to the public as a pioneering humanitarian,” President Drew Faust said in announcing the appointment. “But among scholars he is equally well-known for his research and writing, which have crossed boundaries between the social sciences and biomedical research and married theory and practice to forge a new approach to global health. He is also an outstanding educator with a remarkable capacity to inspire students to focus their minds and their energies on serving the common good.”

The President and Fellows of Harvard College established the University Professorships in 1935 to recognize “individuals of distinction … working on the frontiers of knowledge, and in such a way as to cross the conventional boundaries of the specialties.”

Farmer, whose research focuses on community-based strategies for combating infectious diseases, on health and human rights, and on the role of social inequalities in determining disease distribution and outcomes, becomes the first Kolokotrones University Professor, a chair established through a gift from Wendy and Theo Kolokotrones, M.B.A. ’70.

“Having built my academic career around the conviction that we can take the fruits of scientific discovery in medicine and public health and improve the lives of people who have been marginalized by poverty and other forces beyond their immediate control, I am deeply grateful to Harvard,” Farmer said. “I’m grateful for decades of support for a model of engagement that links research to training to direct services, and for the opportunity to show how scholarship and teaching can have a profound impact outside the classroom.”

Born in North Adams, Mass., Farmer received his undergraduate education at Duke University before earning an M.D. as well as a Ph.D. in anthropology from Harvard in 1990.

Farmer is widely known as co-founder of Partners In Health, the international humanitarian organization that works cooperatively with communities to combat disease in resource-poor settings. With the team at Partners In Health, Farmer has played a key role in mobilizing relief efforts after such devastating disasters as the earthquake in Haiti and in the advancement of community-based strategies for treating AIDS and tuberculosis among populations living in extreme poverty. He has been involved in the construction or renovation of dozens of hospitals and clinics in Latin America and Africa, and has trained hundreds of physicians from Harvard Medical School and across the world.

His research at the intersection of medical anthropology, public health, and clinical medicine has formed a cornerstone of the effort to relate theory to effective practice in global health. His work is recognized as having made essential contributions to ethnography, the anthropology of epidemic disease, the theory of structural violence, and empirical studies of human rights in the health arena. He also has contributed to clinical literature in the arena of drug-resistant tuberculosis and AIDS. While many scholars working in the field of medical anthropology are able to clearly describe the problems facing a particular community, Farmer’s medical training and extensive fieldwork enable him and his team to develop and implement solutions to serious public health challenges.

In the course of his work, he has documented the ways that power relationships in underdeveloped societies act as obstacles to effective health programs and has shown how better ethnographic knowledge can overcome such obstacles. His books “AIDS and Accusation,” “Infections and Inequalities,” and “Pathologies of Power” are staples of the curricula in public health and anthropology courses for undergraduates, graduate students, and medical students. “Partner to the Poor: A Paul Farmer Reader” was recently published by the University of California Press.

His work with AIDS and tuberculosis patients in Haiti, Peru, and Rwanda has been instrumental in convincing global health organizations that treatment and prevention must be integrated fully in such settings. Previously, concerns that poor populations would not stick with extensive treatment regimens led policymakers to place their emphasis on prevention efforts.

“We know social inequalities are embodied in the literal sense, and then increase the risk for many pathologies and also for poor health outcomes, even though we do have, globally, the means to improve outcomes dramatically,” he said. “These are truly biosocial problems, but ones which we really can address.”

Among the many distinctions awarded to Farmer are the Carter Award for Humanitarian Contributions to the Health of Humankind from the National Foundation for Infectious Diseases, the Salk Institute Medal for Health and Humanity, the American Anthropological Association’s Margaret Mead Award, and a John D. and Catherine T. MacArthur Foundation Award. He is a member of the American Academy of Arts and Sciences and of the Institute of Medicine of the National Academy of Sciences.