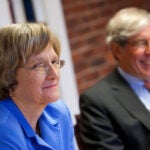 Jeffrey R. Williams was named the inaugural executive director of the Harvard Center Shanghai on Nov. 22. A graduate of both Harvard College and Harvard Business School (HBS) and an executive with decades of experience in greater China as a banker and consultant, Williams assumed his duties immediately.

The Harvard Center Shanghai, which formally opened on March 18 in the city’s Pudong district, supports a wide range of Harvard activities, primarily via the University-wide Harvard China Fund (HCF) and HBS.

As executive director, Williams is responsible for the center and its staff in support of those activities, which include student programs, faculty research, case writing, conferences, and executive education programs offered in partnership with Chinese institutions. He also will build relationships with key academic, business, and government leaders in greater China. Additionally, he will serve as the center’s chief public representative by providing information about Harvard and about the center’s work to organizations in China and throughout the world.

“Harvard’s engagement with China dates back well over a century, and the level of interest in China from our faculty and students has grown enormously in recent years,” said Jorge I. Domínguez, Harvard’s vice provost for international affairs and the Antonio Madero Professor of Mexican and Latin American Politics and Economics. “The Harvard Center Shanghai opens a new and exciting chapter in Harvard’s engagement with China and China’s connections to Harvard.  The center will be the key locus of support for the University as we continue to build relationships with Chinese colleagues and institutions and as we expand opportunities for all of our faculty and students to pursue their interests there.  Jeff’s work in Asia and deep connections to Harvard make him an ideal choice to be the center’s inaugural executive director.”

“China is important to many faculty and students across Harvard’s various Schools,” said Williams. “With the country’s growing influence in the world, and Harvard as one of the world’s most influential academic institutions, the University has determined to engage with China through the Center in support of a wide range of scholarly activities. The center will also provide a focal point to maintain connections to Harvard alumni in China, many of whom are leaders in their respective fields. It is an honor to be the person to help establish this center in support of Harvard’s expanding work in China.”

Williams has spent most of his career in East Asia, most recently as a private consultant in China. Prior to this, he was president of the Shenzhen Development Bank and the first foreigner to lead a Chinese bank since the founding of the People’s Republic of China. Previously, he worked in Taiwan and Hong Kong for Citibank and as the Taiwan general manager for American Express Co. and Standard Chartered Bank. Fluent in Mandarin, Williams was one of the first Americans to teach at Peking University after the resumption of diplomatic relations between China and the United States.