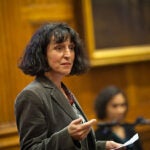 In China, discussing the Tiananmen Square protests of 1989 remains a political taboo.

But Rowena He, a lecturer in the Department of East Asian Languages and Civilizations, is determined to shed light on the controversial issue. In the freshman seminar that she is teaching this semester, “Rebels With a Cause: Tiananmen in History and Memory,” He melds the personal with the intellectual by bringing in guest speakers and sharing her own experiences.

In the spring of 1989, millions of Chinese students, intellectuals, and ordinary citizens demonstrated throughout the country in an effort to bring about political reform. “Students took to the streets out of hope and trust in the government that it would improve,” He said, explaining that her generation, instilled with values of sacrificing for the nation and the people, was very idealistic.

The protests ended, however, when the People’s Liberation Army fired on unarmed citizens and carried out widespread arrests, imprisoning or exiling protest leaders and many supporters.  Thereafter, any mention of the clash, which has come to be known in Chinese as the “June 4th Incident,” was silenced in the press and banned from the classroom. Since then, the government has worked to create an official version of the event, placing the blame on the students. But human rights groups, the families of victims, and most participants strongly disagree with the official story.

“The struggle is ongoing,” He said. “It’s still a political taboo.  We keep hearing stories of exiles being turned back when they try to return home to attend a parent’s funeral, of scholars working on the topic being denied visas to China, and of families of the victims being prohibited from openly mourning their family members.”

Twenty-one years ago, when He wore a black armband as a gesture of mourning on the day after the violence, she recalls being told, “If you don’t take that off, no one will protect you.”

“We learned to lie to survive,” said He, who eventually left her homeland and received a Ph.D. in education from the University of Toronto.

For Gorick Ng, a freshman in the seminar, He’s personal connection to the material makes the class unique.

“She’s not just teaching the class, she’s really sharing a part of herself,” he said.

Like many of the exiles she studies, He separates her Chinese identity from the current Communist rule.

Today, she speaks passionately about the importance of keeping the memory of 1989 alive.

“I never imagined that one day I would have the opportunity to teach students who are now about the same age I was at that time about that part of history,” He said. “It is like a dream come true. I treasure every minute of teaching the course.”

The Tiananmen violence has gained increased attention recently with the awarding of the 2010 Nobel Peace Prize to Liu Xiaobo, who was imprisoned after the military crackdown for his role in trying to bring about a nonviolent, peaceful solution to the crisis. But scholars inside China are still banned from studying or even speaking about the topic. For many years, He tried to remain quiet about her research out of fear.

He’s class is the first freshman seminar on the Tiananmen protests offered at Harvard.  It was originally intended as a graduate seminar, but when the Freshman Seminar Program approved the course, she jumped at the opportunity to present it.

“Freshmen are curious and full of energy,” He said, noting that they’re also less likely to have preconceived ideas about the topic and might be freer to form their own opinions about the event. “I think they are really smart young people, and they haven’t been polluted. They have the intuition and common sense to know that killing isn’t right.”

In the classroom, He encourages debate, urging her students to try to enter the minds of China’s Communist officials as well as of student leaders and ordinary citizens.

Two guest speakers — one who was then a college freshman and an eyewitness to the military crackdown and one a sophomore who was imprisoned for his activities — came to the class to provide students their first-person accounts. One joined the students for dinner in Annenberg Hall after the seminar session.

“It’s really exciting to hear from people who actually started the movement,” Ng said. “It’s something that we could not have gotten from reading a book or watching a video. It really makes history come alive.”

The class also had the opportunity to explore the Tiananmen archives at the Harvard-Yenching Library, which include photographs, signs held by protesters, and clothes stained with blood.  In class, the students have role-played as the “Tank Man” who faced down armored vehicles, as Tiananmen mothers, student demonstrators, ordinary citizens, and the military.  At the end of the semester, the class will host a half-day conference to share what students have learned with the Harvard community.

He hopes that the course and the conference will contribute toward preserving the historical truth, especially among the younger generation.

“It is not possible to understand today’s China without understanding the spring of 1989,” she said.