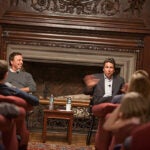 You never know when inspiration may strike, or why.

Just ask Stephen Schwartz. Years ago, the famous lyricist and composer, known for his hit musicals “Godspell” and “Pippin,” was on a snorkeling trip when a friend told him about a book with an interesting spin on the classic “The Wizard of Oz.”

“I just thought that’s the best idea I’ve ever heard in my life, and I have to get back to the mainland and get the rights, and I don’t know why,” said Schwartz. Ultimately, he turned the Gregory Maguire novel that turns the story on its head, telling it from the perspective of the Wicked Witch of the West, into the Broadway megahit musical “Wicked.”

Schwartz participated in a conversation on Tuesday (Nov. 30) at Club Oberon along with Diane Paulus, artistic director of the American Repertory Theater (A.R.T.). The discussion, one of a longtime A.R.T. series involving performers, directors, producers, Harvard scholars, and the public, is in step with Paulus’ mission to “expand the boundaries of theater.”

In retrospect, Schwartz realized that his connection to “Wicked” involved his identification with the main character, the notion of being an outcast, and the vilification of people in society. But at the time, he told the crowd, he simply envisioned it “on the stage.”

Similar to inspirations for his other works, Schwartz said, “in some strange way I can see the whole thing right away.”

Paulus agreed with that assessment of the creative process. “I think that’s what I feel when I get work. It’s like sense of the potential of it as a theatrical event,” she said.

Together the pair said they sensed the possibilities for “The Blue Flower,” an upcoming production at the A.R.T. The avant-garde tale of love, art, and war is described as a “fusion of Kurt Weil and country-western music.”

Schwartz, a consultant for the show, brought it to Paulus’ attention a number of years ago. She called the unique score, with its sense of passion and intelligence, “by far the most exciting music I had heard in years.” The new production, she added, is “exactly right” for the A.R.T. and its mission. “It takes music and theater and storytelling and is pushing the boundaries.”

For Paulus and Schwartz, music is an integral part of the theatrical experience. They bristled at the notion offered by some critics that serious theater doesn’t include a score.

“For me, the theater is music,” said Paulus. “When you are doing theater,” she added, “you want to take on every possible means of the theatrical event, and for that, music is at the core.”

During their talk, they also offered tips to up-and-coming directors and producers in the audience. Paulus said her early experience directing opera and her training as a pianist helped to infuse in her own work a profound connection to music and its importance in storytelling.

“What’s so great about an opera or a musical is you have the music, you have double the information giving you signals. … If you have studied an instrument or you can learn about music, it just empowers you.”

When it comes to feedback, in essence, the harshest and most general criticisms are the most helpful, said Schwartz. Comments like “I was bored in that scene,” or “You lost me in the whole second half of the second act,” he said, tell you succinctly “what your problem is.”

The best way to learn is to write and put on shows, added Schwartz — to work on shows in “any capacity.” He encouraged students interested in the theater to take advantage of Harvard’s “incredibly creative environment.”