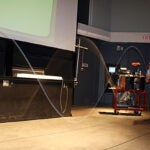 Waves and the waggle dance

The event, “The China National Conference on African American Literary Studies and the Releasing of H.L. Gates Jr.’s Works in Chinese Translation,” brought together more than 50 professors and graduate students who presented seminar papers about Gates’ work and the African-American literary canon. The Dec. 11-12 event also marked Gates’ 60th birthday.

Gates, the Alphonse Fletcher University Professor, is director of the W.E.B. Du Bois Institute for African and African American Research at Harvard. Gates co-edited the first four volumes of “The Image of the Black in Western Art,” just published by the Harvard University Press. His newest book, “Black in Latin America,” will be published in the spring. He was one of only two academics named to Ebony Magazine’s Power 100 list for 2010.

Literary scholars in China have shown increasing interest in African-American literature over the past several years. Two more of Gates’ books are being translated for publication in China next year.

Wang Yuanlu, who is working on a translation of Gates’ “Tradition and the Black Atlantic,” called Gates “a beacon of light on a challenging course. Chinese scholars believe that the publication of his two books will help them better navigate the stormy waters of African-American literary studies.”

“This was truly one of the greatest honors of my career, and I am deeply grateful to my colleagues at the Beijing Foreign Studies University both for the conference in my honor and for overseeing the publication of my work into Chinese,” said Gates.